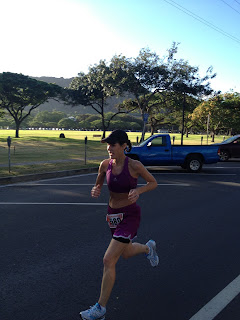 As always, Stefan puts on a great Ocean Swim Race. The Outrigger Canoe Club hosts a 1.2 mile Ocean swim. It's a small local race <150 participants, but that makes for an intimate, fun, still competitive race with friends. This is only the second year I've done the race and it did not disappoint. It's a "late" start, so you don't have to get up at the crack of dawn (although we did so we could see this lady crush it in the Hibiscus 1/2 marathon the same morning! Great 5 min PR for Michelle who ran a smokin' 1:33!!).
Where was I, late start, right...the pre-race briefing is always interesting, especially if you know Stefan. If you don't then you might not get his humor. Anyways, we found out that the course was going to be changed from what it has been in the past since the currents out in front of the Outrigger were rippin'. (I swam out from Kaimana on Saturday and we got a little taste of what the currents could be like the next day and the ocean did not disappoint Sunday morning, she was angry! 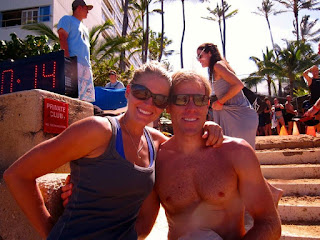 The swim started out just fine, we were crusin' out to the first turn buoy and I found myself with Ben and another boy I didn't know (the eventual winner and 16yo high schooler, go figure). The three of us stayed pretty close throughout the entire race. After that it was a battle to get to the next buoy. We were swimming parallel to the shore, Ewa bound and it felt like it took forever to reach that buoy (after the race, I found out the lifegaurds and volunteers had to pull about 40 people from the ocean because they weren't making forward progress, the currents were that strong!), we finally made it and the currents eased a little, but that final swim in to the Outrigger was still super tough, we had to angle Ewa bound to even get DiamondHead! I do need to work on my water exits as I fell on my face running out of the water, I thought for sure Ben was going to blast past me up the hill, but I was able to recover and snuck in right ahead of him. 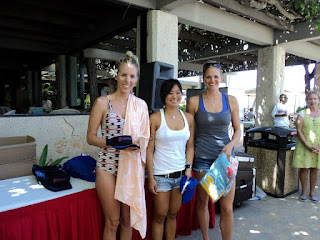 It seems like my swimming is finally starting to pay off, I ended up 2nd OA and 1st female. Super stoked about this swim! The best part of this race is the brunch afterwards and getting to spend time catching up with friends. 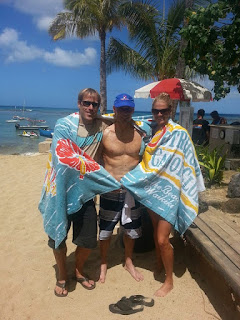 Aaron and Gary also did great! Aaron won his AG in a super fast time as well and Gary, in what I think might have been his first swim race ever, was 2nd in his AG! All-in-all a great morning. 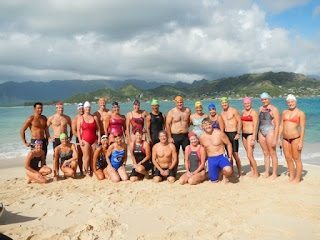 Monday morning, obligatory Memorial Day Mokes swim. A huge group of us swam out to the Mokes and once again the Ocean did not disappoint, super choppy and fun! Must have been a record group size of people swimming out there....

I'm off to pack now, leaving for Big Island bright and early!
Posted by Unknown at 7:07 PM