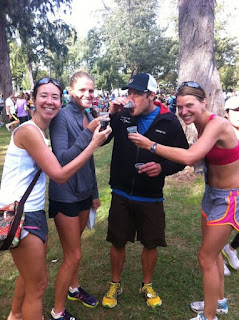 The inaugural Honolulu Half-Marathon, The Chase, or the Hapaula Half-Marathon was on Sunday. This race was set up in a new format which was actually super exciting. The Chase gave local runners the chance to race against and finish in the money with two recent Honolulu Marathon champions: Jimmy Muindi and Nicholas Chelimo. 12 of the best local women were given a 18 minute head start, 12 of the best local men started 9 minutes after the 12 women and then Muindi and Chelimo started 9 minutes after the men with the rest of the racers. So basically in order for Muindi and Chelimo to "win" the race they would have to make up 18 minutes on the fastest women. Based on best times, it seemed as though it would be a race to the finish for the top prize...more on that later.


So, as I'm sure many of you have seen or heard, us folks here in Hawaii have been a little wimpy when it comes to the weather lately. I know, I know, we live in Hawaii, we shouldn't complain about the weather...ever! But it's been pretty crappy lately: rain, thunder, lightning, water spouts, tornado, wind blowing like crazy (40+mph) for the past couple of weeks. I was skeptical about how the conditions were going to be on Sunday morning. Thankfully the rain held off...the wind, not so much. After the race, I looked up the wind conditions and they were 40-50mph, maybe that's why it felt like I was running into a brick wall for the entire race. 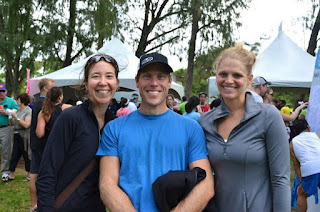 I haven't done any speed work since before the marathon in December, so I wasn't shooting for a PR in the race (but secretly I was, I think I always will, that's just how I operate). Anyways, the plan for this race was to start out pretty conservative and build throughout.  I'm pretty terrible at sticking to plans (something I seriously need to work on before June) but in the end I was able to build throughout. The first few miles running Ewa bound through town were pretty relaxed and easy, we had a tiny bit of a tailwind, which was super nice. Right around 4 miles I started to see the fast ladies running by. They still had a few minutes on the Kenyans. After that, the fun part began, running into the wind. I was running much faster than my anticipated/planned starting pace, but was feeling great the first four miles, isn't that how it always is at the beginning of races. As soon as we turned and started to head back toward DiamondHead, it felt like I got smacked into a brick wall. I've never been running before and literally gotten blown off course and to the other side of the road, that's how strong the wind was blowing.  The next four miles were tough, I had to fight hard with the wind to continue building into the race, but kept building I did. Mile 9-10 was uphill, over the backside of DiamondHead and that was a change from out normal race routes here in Hawaii, so even though it was uphill, it was pretty fun. Plus as soon as we got to the top it was all downhill and flat the rest of the way. I was starting to feel a bit tired at this point, but knew I only had a little ways to go. I made it to the top and the right when we started to descend DiamondHead, here comes the tailwind. No, we didn't want it to help us through the flat, straight, streets of town or to help us get up DiamondHead, but sure, let's let it help us downhill the last mile. The last 3/4 of a mile in any running race here are the longest 3/4 of a mile ever. This was the first race I've done here that I actually felt like I could finish fast, feeling strong! And I did.

So, even though I haven't done speed work since before the marathon and this was the longest run I've done since the marathon, I was able to pull out a 2 minute PR and end up 2nd in my AG. I was super happy with how this race went and have a new liking for half-marathons!

Next up...Napa with the girlfriends on Friday...after a huge bike week this week...then it's 3 months until CdA...getting excited!
Posted by Unknown at 11:51 AM 1 comment:

I really shouldn't complain, I live in Hawaii and 99% of the time we have perfect weather......but this has been the satellite image for Hawaii for the past week!! 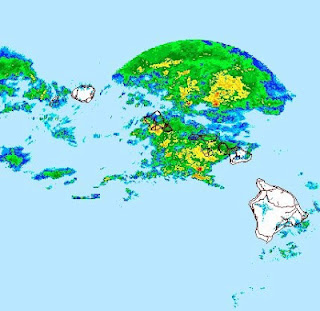 So much for fun training outside...
Posted by Unknown at 8:08 AM 1 comment: