*Side note....this was a test run, the organizers wanted to try out the idea, see what worked and what didn't and if it was something people would enjoy being a part of in the future. Survey says, people loved it and they will make some changes and hopefully put on another one in the near future with more people! :-)

My friends Joy and Amanda were out riding one day, the same typical route they ride almost every weekend and they decided they needed to change things up, make things more fun again. Doing the same thing over and over again can get a bit monotonous and when you get bored you get tired and lazy, you stop paying attention and it can become not fun anymore. They were ready to change that. They wanted to spice things up. We are all active people and like to get up and move around and be outside, sitting around all day doing nothing can get old as well. So they came up with what they dubbed, “Venture Race.” 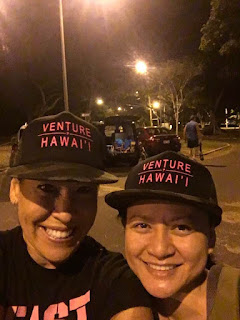 The idea was a combination of a Scavenger hunt, Survivor and The Amazing Race, with a little triathlon thrown in there. We didn’t get a whole lot of prior information, just that it was going to be a fun day with friends and bring stuff to swim, bike and run. We arrived at 6:00am Sunday morning ready for instructions and an adventure. Our trusty planners Amanda and Joy were ready and raring to go. We were told to, first and foremost have fun, next follow the instructions on the cards and post our finds to Facebook or Instagram so they could check and make sure we were following the rules and the third and final instruction was the “bitch slap,” if you wanted to road block or give another team a penalty, you needed to ask a stranger to take a photo of you and your teammates posing in a swim, bike and run position and then text the photo to Joy or Amanda. 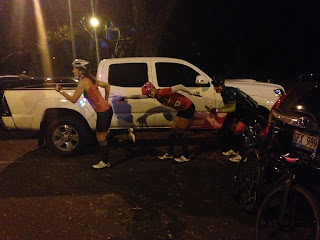 The first leg was the bike leg. The cards were given out and one of the teams just took off down the road. We had to find three different places on the island and either take a picture or a video at the location. We had pictures of the places as well as a few sentences describing the area we were looking for. My team, “always naughty, sometimes nice” decided to look at the cards and figure out where we were going before we left. Well…..that took a bit longer than I thought it would. I wasn’t entirely sure where to go, we googled, facebooked and put our minds together and came up with the first two places right away so off we went! On our way to the first location, we were thinking about the clues given on the third card to try to determine the location of the playground. There were certain words underlined in the clues and brilliant Michelle, said, “how do you say coconut in Hawaiian?” trusty google told us it was Niu, so Nui Valley was where we were headed to find the third location on the bike (after we successfully found the first two stops). When we got to the third location we were pretty sure we were at least the 2nd team there, we hadn’t seen the group that took off in the beginning, but when we had to go down the slide at the playground, it didn’t look like anyone had been there yet…hmmmm were we ahead? We checked off the third item on the bike and back to the park we went. 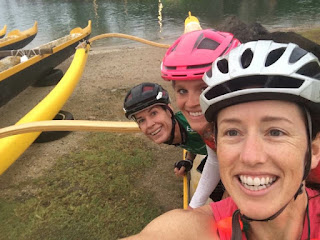 When we got back to the park we realized that we were the first team to arrive, but we had been “bitch slapped,” so we had to wait 3 minutes before starting the next leg of the race. 3 minutes is a long time when you think people are gaining on you…note to self….don’t draft in a race and get a time penalty…this was a for fun game with friends and that 3 minute wait was stressful! 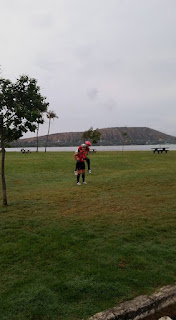 Anyways, the three minutes ended and we were off on the run portion. We figured out where all the run stops were right away…running around this area quite often pays when you are looking for hidden items. Snapped a few pictures and pau! 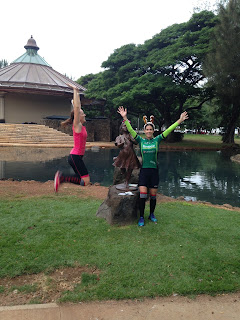 We got back to home base and they weren’t even ready for us to go on to the swim, or “water play” portion of the race. We ran with Joy down to the ocean and received our instructions. We needed to blow up an inflatable animal and then one of us puts on the inflatable and the other two people hold onto the inflatable with one arm and swim with the other arm out to Joy, around her and back in to shore. Swimming with 1 arm dragging another person isn’t easy, but causes many belly laughs, which was the point of the day. We made it back to shore and were the first team to arrive. 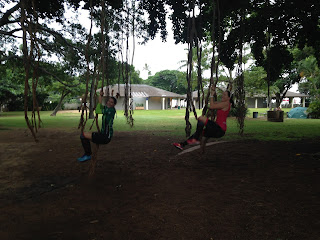 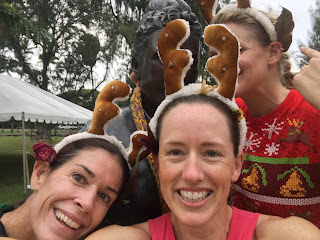 Winning wasn’t the point of the day, but we are all competitive people so of course we wanted to win! Haha. The point of the day was to have fun with friends, laugh, be active, enjoy and remember why we love this sport. Afterwards we had a brunch and “awards ceremony” at our friend house. Thanks so much Joy and Amanda for putting on such a fun event. And thanks to my teamies Michelle and Lauren, go us!! I’m excited for the next edition! 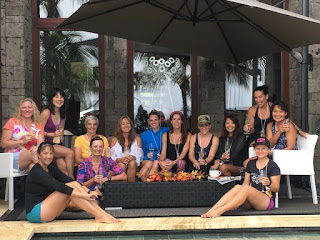 Posted by Unknown at 8:36 AM No comments: