I did this race two years ago and it was my first big race. I didn't know anyone or really what I was doing and I had a pretty successful outing. The water was calm, the winds were off and it wasn't too awfully hot out either (at least that's how I remember it). I was totally naive to triathlon. Two years later, I am in great Honu shape, I've put in all the hard work (pool workouts, ocean swims, long rides, hill climbs, intervals, track workouts, tempo runs, long runs, bricks etc), I know what the course is and what to expect and the day ends with a result I'm not 100% satisfied with, I want a do over! But you don't get do overs in races, races happen and you are either physically and mentally able to handle what the day has to offer you or....you're not. Yesterday was not my day, I was prepared and ready, but it just wasn't my day. Before I get into the nitty gritty, I want to say congrats to everyone that raced, we really had to fight for that finish! Yesterday was tough and to everyone who toughed it out out there, you deserve a medal (oh wait, you got one!). Seriously though, if you finished, you are a rockstar! 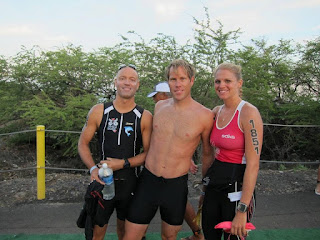 You win some, you lose some, but there's always something to be learned. I think I learned more from this race than I have from any other race I've done. There are still some unanswered questions, but I will definitely be more prepared when the unexpected happens next time.

Pre Race:
We woke up to winds in the morning at o'dark thirty and knew it was gonna be a tough one out there on the bike today. The winds had been off all week and sure enough, race morning, they were baaaaack! It wouldn't be a Honu without those famous Kona winds right?!
Anyways, I had my usual pre-long race breakfast of a bagel with banana, peanut butter (yuck!) and honey. Along with a drink, in retrospect, maybe I should have drank a little more pre race? I might have gotten dehydrated on the course? Not sure, but more water, EFS, gatroade in the morning wouldn't have hurt things. After breakfast and applying the ever important PlanetSun Suncreeen (face and body formula!) we were off to Hapuna.

Michelle was our Super Sherpa for the weekend so we didn't have to wait to take the shuttle, all we had to do was hop in the mini and get driven over!

We got to transition, pumped tires, reapplied PlanetSun and headed down to the beach for some stretching and to get away from all the crazies and anxious people milling around transition. We got a course conditions report from Stefan who had just swum the course this morning (thanks!) then got in and swam a bit, chatted with some friends and before we knew it, the pros were off. 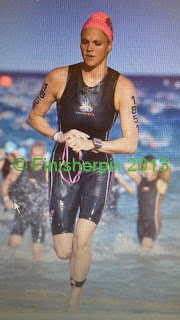 Wave starts. The pros went off at 6:50, followed by the men at 6:53, then the women at 7:00. I followed Stefan's directions and took the best line I could and made it to the first turn buoy without much struggle. There were 2 girls in front of me, but then we started to hit the wall o' men and I lost them. I finally met up with Kathryn at the second turn buoy right before we headed across the bay. I was feeling strong and smooth on the swim, not exerting myself to much, but I was confident in my position in the water, slingshotting past the men and staying relatively untouched. Well, that didn't last long, all hell broke loose at
the 3rd turn buoy, this is where men were cutting the course, arms were flailing; it was total chaos. I guess when you start 7 minutes back from the men and you're a pretty good swimmer, you're gonna to run into a huge wall of them at some point and this was that point. I got completely lost at this point, people were swimming in every direction, the sun was high in the sky obstructing my view of shore, I completely thought I had done a 180 and started swimming back out to sea! The buoys are there for a reason people, don't cut the course, you will eventually get caught and it's not worth it!!! Finally after probably 2 minutes of chaos, I got my bearings back and was able to swim in to the finish. After all that, I was 5th woman out of the water (2nd in my AG to KT who had a great swim) and happy about the swim (albeit annoyed at the men that got in the way there at the end).

T1
uneventful, run up a short steep hill. If you just jog, it's super easy to run past lots of people! I found my bike easily and was off. 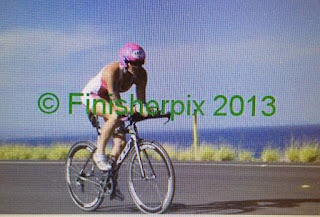 The winds did not disappoint, they were here and they were constant. I guess you never know what to expect with the winds in Kona, but you can expect it to be challenging. I'm pretty sure there was a headwind the entire ride. So much for the winds not picking up until later in the morning. I had a great first half of the ride, I think I only got passed by 3 or 4 women which doesn't usually happen, so that was exciting for me. After the turnaround at Hawi, I was looking forward to trying to blast back down the hill to Kawaihae, but no dice, Madame Pele didn't want that to happen, headwind, headwind, headwind, headwind but at least it was a going downhill and I was basically done with all the climbing. I started to get a little grumpy in Kawaihae before the turn back onto the Queen K. At this point Frans rolled up on me and shouted "Let's go." Well, thank goodness for that cause I stayed with him for almost a mile and then we hit the hill to get out onto the Queen K. I stood up and went, that was the plan at least I thought Frans would come with me, but as soon as I got back onto the Queen K, I looked for him behind me and he was gone...whoops. Sorry Frans, but thanks for reigniting my fire to get this bike done. The last 10 miles were uneventful, slow (avg 15mph!? seriously, the wind was ridiculous!!!) and I couldn't wait to get off my bike.
I was super pleased with how the bike went and was ready to run!

The Run:
The first four miles of the run felt pretty good, I was holding a solid pace, one I could definitely keep up for the remainder of the run and I might even be able to catch some ladies up there. I had a little twinge of a side cramp, but nothing a little long, slow breathing couldn't get rid of. About three miles in, I was still feeling 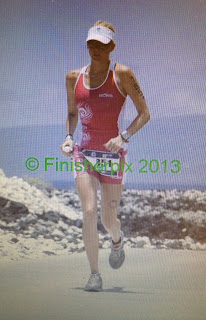 good, it wasn't even hot out! Not a good sign. That should have been my first indicator that something was seriously wrong
(this was the hottest date on record for this race in the 10 years it has been happening). It's probably not a good thing when you're running in miserably hot heat and you don't feel hot at all. I plugged on and made it about 7 miles before I started imploding. I'm not exactly sure how I got through the rest of the "run", with the puking, kneeling down on the golf course to puke some more, walking, jogging, attempting to run and not being successful, just one foot in front of the other. Thanks Ryan for all your help out there on the run! It was great to see everyone out there being so encouraging when I was in such a bad place. The negative self-talk started, was there in full force, I wanted to sit down on the side of the golf course, curl up in a ball and not move. I'm not sure what it was that got me to that finish line, but I got there. I ended the day 5th in my AG, in a race that I had to fight harder than ever to finish and at points I though I might not finish at all. 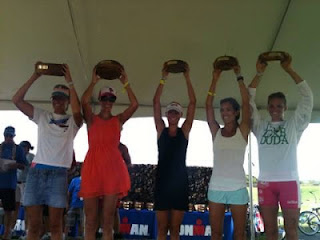 The result is not what I was trained for or wanted as an end result, but I learned some valuable lessons that I can and will take with me in my future endeavors. I know what to do when I get into those dark places, how to get myself out of them, and how not to go there in the first place! I now know better how my body will respond to extreme heat and am glad I had this experience because I anticipate racing in hot conditions in the future. I know that I can race and be mentally and physically drained and still finish. Leaning to "embrace the suck" and keep moving forward. I know there are always people out there that support and love me no matter what the outcome. Being able to spend the day with an amazing group of people on a tough, tough day is something I won't soon forget. Many more lessons were learned from this day and they are stored away ready for use when needed! Thanks to everyone for your encouragement, support and kind words before, during and after the race. 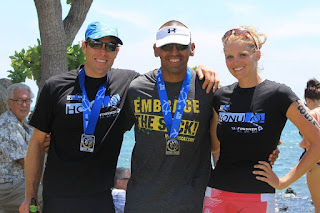