Ironman has to be the most inspiring athletic event that there is. Where else can people from 18-81+ be competing for 17 straight hours?! That's impressive, I don't care who you are. This past week definitely made me thankful, happy and excited that I signed up for my own little piece of Ironman. CdA, June 2012. Can't wait!

It's a little daunting to think about it, but after watching the World Championships, I'm inspired. It was awesome to be at the event and know a few people that were racing and every time each and every one of them, ran past us on the side of the road they all had a huge smile on their faces. I know it couldn't have been all smiles for them all day long, Ironman is a loooooooooong day, but I never once saw any of them looking like they were struggling...kudos to Leslie, Claire, Rachel, Michelle, Nalani, Emily, Lindsay congrats on your finishes!

Here's a few pictures to recap the week.

Sorry about the sideways pictures, I can't seem to figure it out tonight...I'll try not to let it happen again
Check out all those smiles!!!
Great job ladies!!
Posted by Unknown at 7:18 PM 1 comment:

I forgot my camera--->computer connection cord so I can't upload pictures, major bummer because I took some pretty awesome ones today...I'll post pictures when I get back to Oahu next Monday..


Tuesday morning Les, Claire and I headed down to the pier for a nice little swim. I came armed with my camera, total tourist move, but I was determined to get some good pictures while we were swimming. There was a pretty decent south swell so that water was a bit more murky than it's been in the past, but Les spotted a Honu and I dove down after it to snag a picture...Pictures to come when I get back to Oahu

Les and I continued swimming on out toward the Coffees of Hawaii boat (best idea ever), we'd lost Claire at this point. She met us at the boat, we had some coffee, took some pictures and headed back in. This was the most fun I think I've had swimming in the ocean. I'd totally swim in the ocean more often if I could have company like I did today. Also, I'm not a huge fan of coffee, but I loved it! If you want some excellent coffee, check out Coffees of Hawaii.

After that, they registered and I waited outside like the good little support crew that I am, then we went to drive the bike course for Claire to see.

Back to the condo and Les and Claire headed out on a short bike and I got to go run. At least it was pretty overcast and not too terribly hot out. But let me tell you, there are definitely some crazies here. Who goes out and rides for 2+ hours 4 days out or how about the crazies running sprints up and down Ali'i for hours, I guess Ironmen do.

Anyways, it was a great Tuesday here in Kona. More to come as the week progresses.
Posted by Unknown at 3:27 PM No comments: 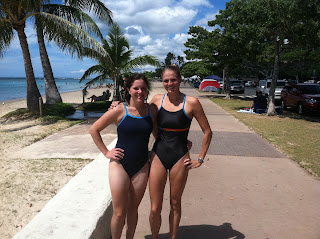 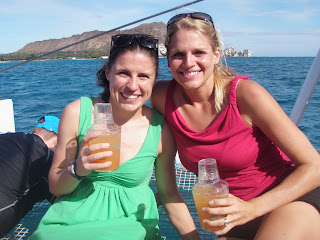 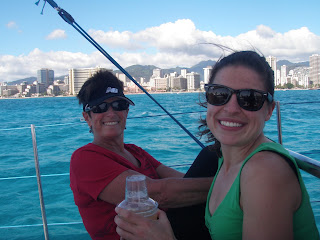 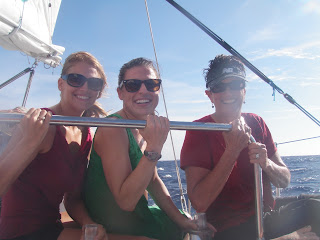 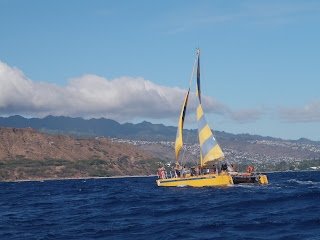 Claire got here on Friday night and I picked her up from the airport, recognized her right away even though we'd never met before and we hit it off. She's a super chill girl and I think we had a great time while she was here. Plus, she brought cheese curds from Wisconsin, major bonus points!! We didn't do much Friday night, just came home and had some dinner. Got up Saturday morning and went for a short run, then we drove into town to go for an ocean swim. I gave her my secret weapon for next weekend in Kona....wait for it.....chewing gum in the ocean keeps the salt water out and keeps the spit balls from sticking in the back of your throat...genius! Anyways, beautiful day for a run and swim. After that it was off to the airport to drop her off and pick up Les.

Les and Mrs. D arrived and our Saturday night was pretty uneventful, out to dinner and back to the hotel to check in and get situated.

Dave and I ran the Marathon Readiness 25k Sunday morning, so it was a 3am wake-up call to get to Kailua for the 5:30 start. I went into this race with a super positive mindset (because it was a different course than last year and I am in much better running shape this year, it was going to be a much better race than last year). Haha. Spoke too soon. It wasn't a terrible race by any means, the first ten miles were perfect, right exactly where I wanted to be and I felt great. well then I reached the hill (to me it felt like a mountain, it really wasn't that big) and mentally I think I checked out. It wasn't on purpose, I tried to stay with it, but for some reason I couldn't pull it together after the hill and the last five miles were worse than the end of the marathon! At least I know some more mental toughness is what I need to work on. The race ended up being fine. I wasn't happy with the result, but I'll take it cause I learned that I need to be mentally though when the going gets rough. On another note, it was Dave's first road race, I'm super proud of him. He did a great job!!

After the race Dave and I headed home and it was time to clean up and relax a bit before heading into town to meet up with Les and Mrs D for an ocean catamaran ride!!! Ive never been on one before and thought it would be something fun and not taxing on Les that we could all do together before heading over to the Big Island. Well we get there and little do we know everyone is wearing beach attire, bathing suits, etc. Great, I guess we're gonna get wet. Oh did we get wet! Drenched. Mrs D got the worst of it for sure. Check out the pictures. I would totally recommend going on this catamaran sail. It was 90 minutes and way more fun than any of us anticipated, Dave missed out for sure. We had a blast!! Then it was off to the hotel to change before Dave met us for dinner. It was a late night for the east coast girls (3am their time).....