Last week Thursday/Friday was dinner/picture-taking/photo-shoot time spent with a bunch of great athletes and individuals here on Oahu. It was the annual BioAstin Ambassador dinner where we got the opportunity to meet and socialize athletes from the other islands, in addition we got to meet Nutrex Hawaii management (the brains behind the business!). 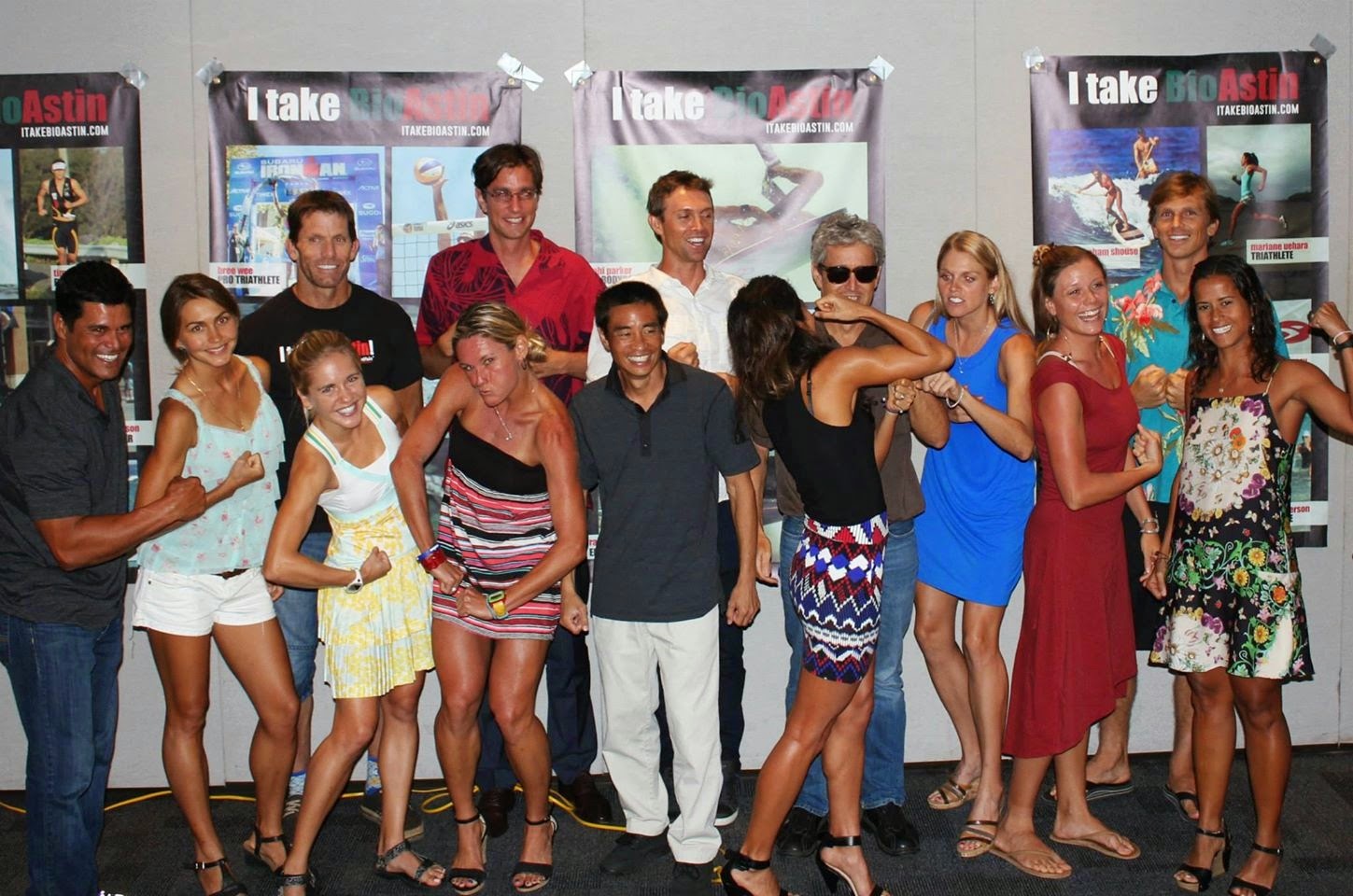 I love Hawaii offers us an environment that lets us be healthy, happy and active year-round. Being able to always meet people and have new experiences is something I love about this place!

Just wanted to share a few pictures of the enjoyable time we had last week. Many more to come soon 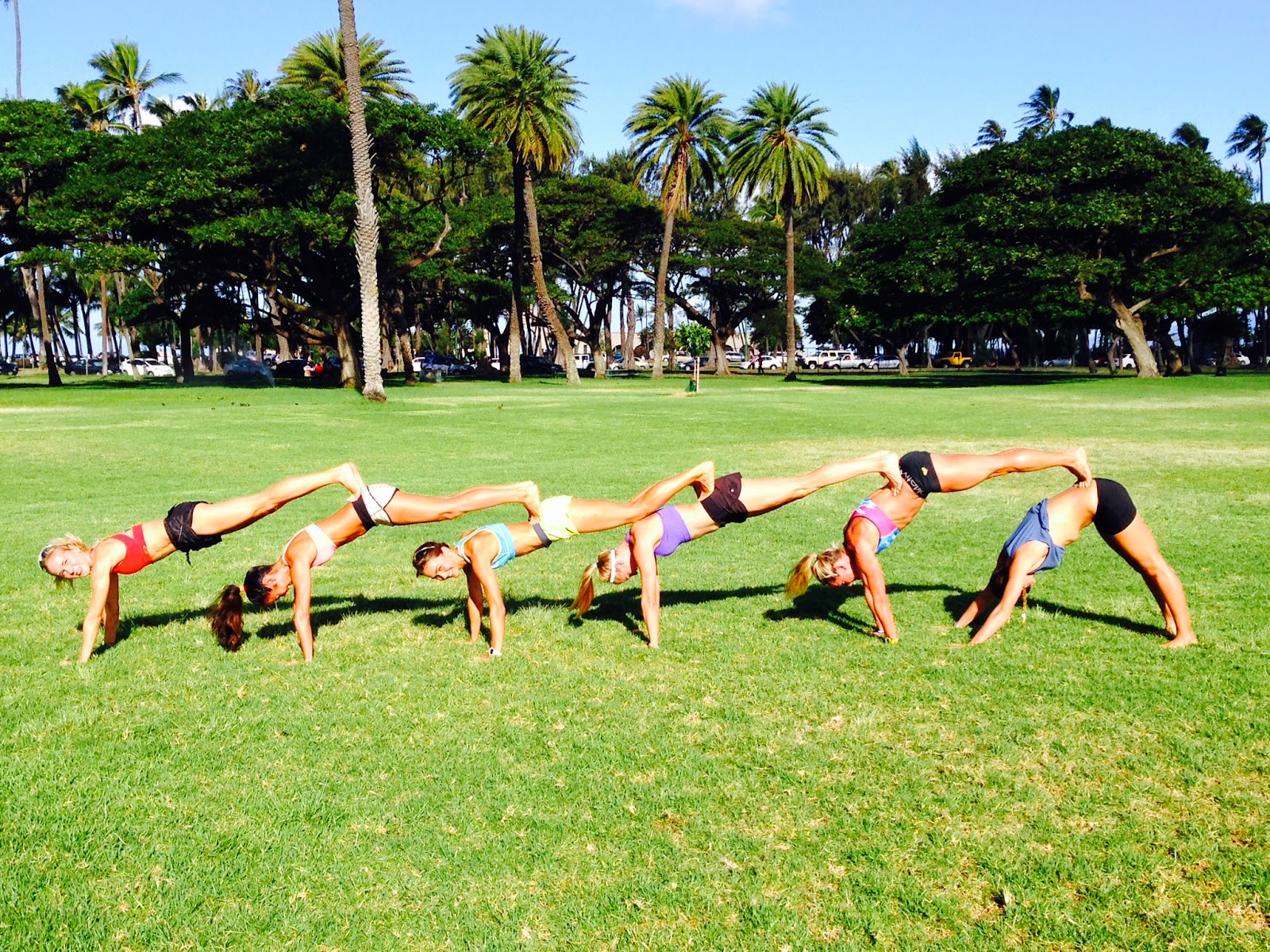 pretending to be yogis 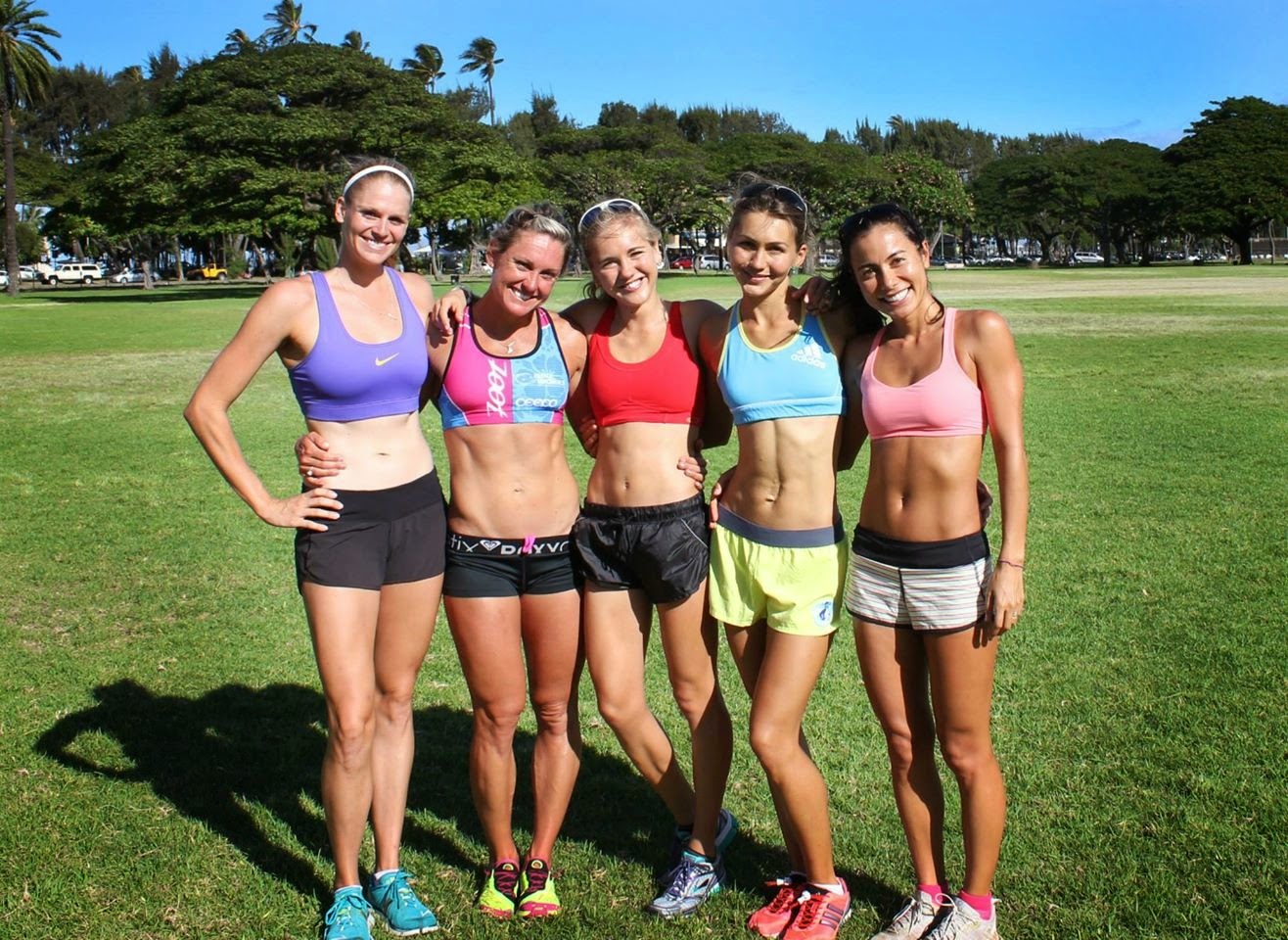 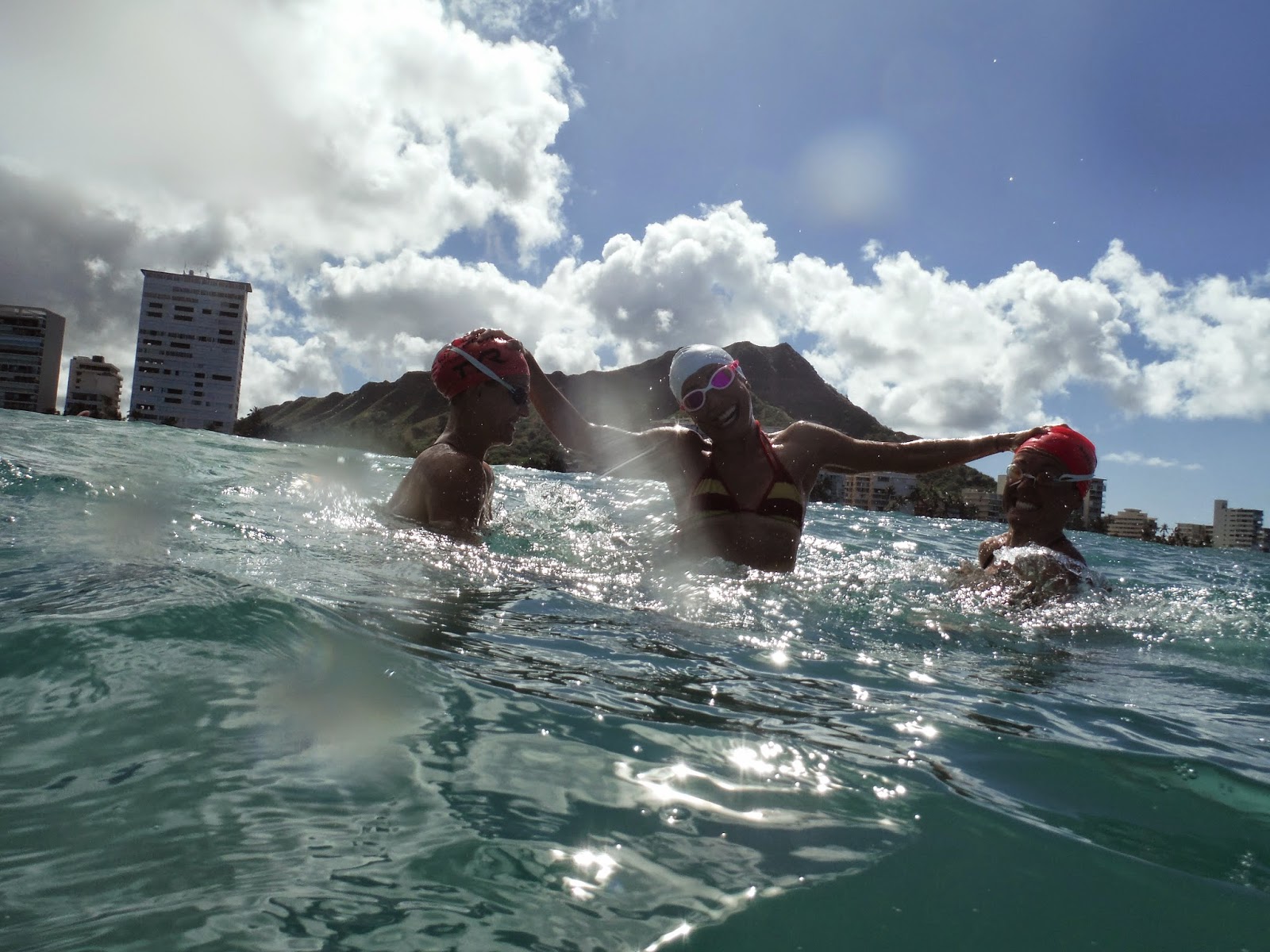 
and on Sunday, after Kawela, Aaron, Raul, Hina and I went on a hike 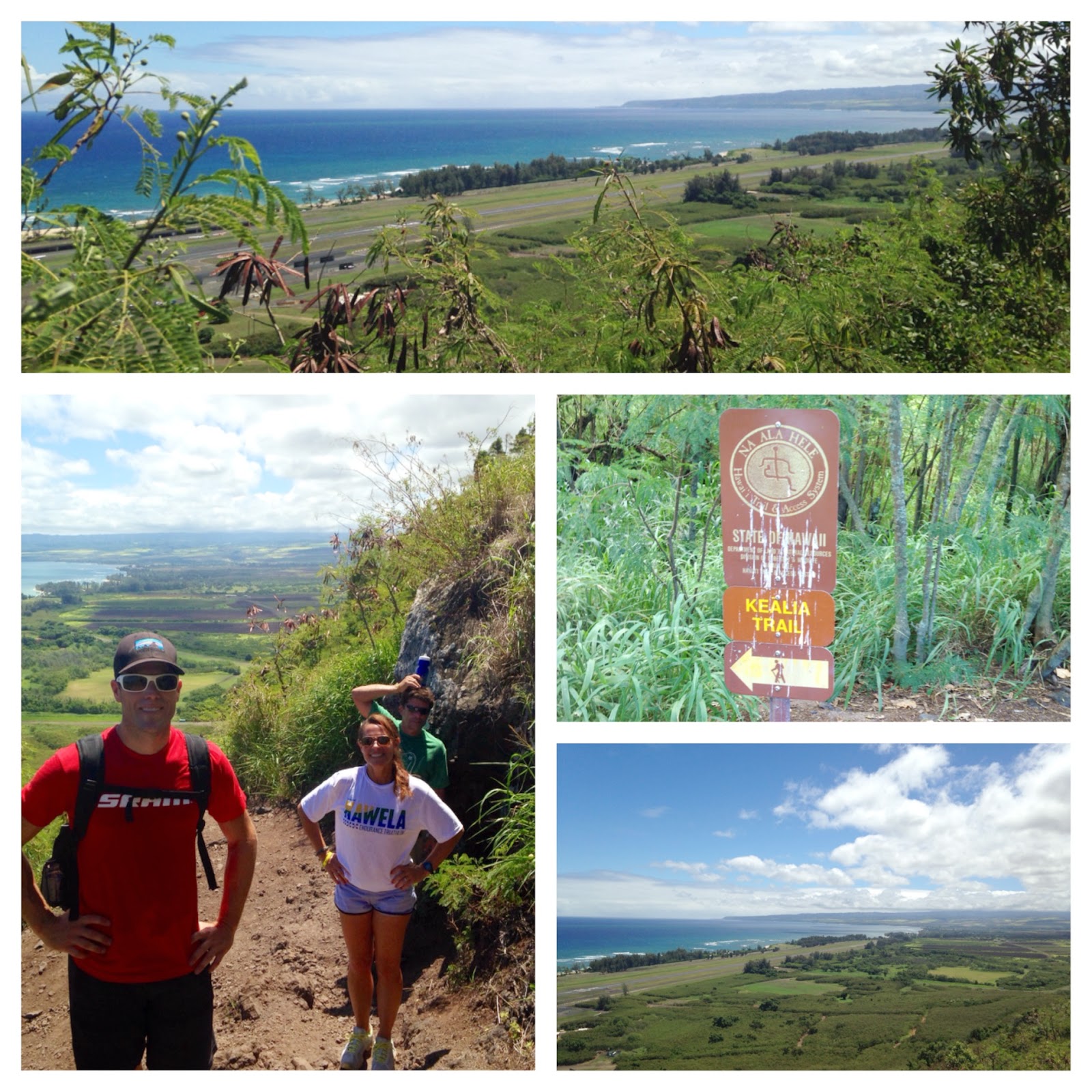 Posted by Unknown at 8:09 AM No comments:

The inaugural event here on Oahu...what a success and such a great event. How fun that we are able to have this event here in our home. Finally, a half-iron distance event on Oahu! Spending a few hours on a beautiful Saturday morning racing with your friends (if you are a part of the triathlon community on Oahu, you were at this event), getting body marked ever so lightly so that I didn't have to lose skin later in the day trying to scrub it off by my good friend Kim, getting handed aid from your friends, neighbors and teammates on the side of the road, finishing on a gorgeous beach with a local band (Smooth Remedy!), layin' in a hammock where it's nice and breezy (thanks KC), getting a massage oceanside and BBQing...sounds like a great Saturday to me! 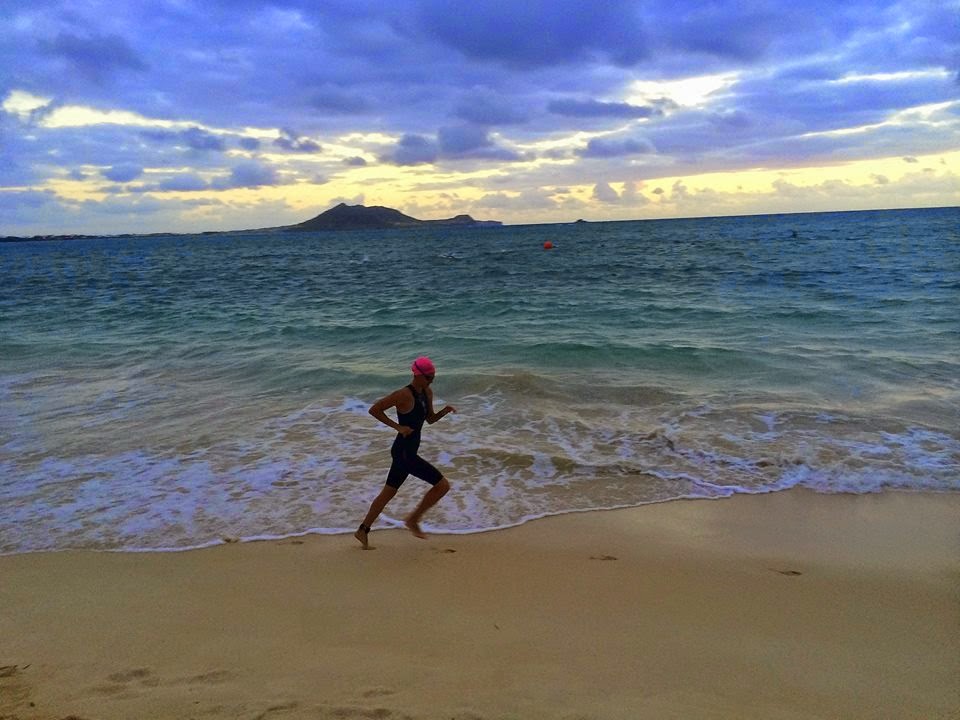 It seems like everytime a race starts in Kailua, it starts with rain (Lanikai tri the past two years, marathon readiness 25ks...it rains on the windward side!). As we were setting up in transition the sky opened up...not an  ideal way to start a race, but as we headed down to the ocean in the still dark, early-morning, the rain stopped. We walked to the boat ramp, where the race started and as the sun began to rise behind the Moks and Flat Island we were off! The swim was a short two loop swim, with the current accompanied by an 800m beach run in between the two loops. The first loop I stuck to Tim's feet (I couldn't see anything...my own fault, I need new race goggles and I think I've said that after every tri this year and then the night before the race comes and I throw my old race goggles in the bag and don't realize they are old, scratched and have almost zero visibility until I get in the water race morning! Live and learn, I'll have new ones before Kona).
Tim was probably quite annoyed with how many times I kept tapping/touching his feet (I know I would have been, but that's racing!). Exit the water after loop #1 and he takes off! I could just not keep up on the 800m beach run, not that I thought I really had a chance, but I sure tried, I didn't want to lose those feet and I thought that if I could stay close on the run, I could catch back up in the water and squeak past him, or at least with him at the end...no dice! Beach running and trying to keep up with Tim do not go together. Loop two of the swim, dive in, catch my breath, make up a little ground, but wasn't able to bridge the gap, I came out of the water first female and second overall.

A side note....that beach run in the middle of the swim was no joke!Sprinting 800m and then diving back into the water to swim throws you for a little loop! It was fun to add another dimension to the race, not something we typically get in triathlons, as much as I dreaded it beforehand, it was actually kind of fun!


The bike course is a simple, point-to-point course, there weren't many turns at all (maybe 3?), the course was well marked and police protected and even though it wasn't a closed course (hard to do on Oahu as there are only so many roads and way to get places), it was well supported and safe.I only got caught behind a tractor for a little while! :-) In my opinion a great, easy way to to get 56/57 miles of road to race on. The stretch of road this race is on is known for it's tailwind so one would think the bike splits for this race would be smokin' fast...they weren't slow, but they were not as fast as I would have predicted. We did get a few good sections of some relatively strong crosswinds, but they came and went quickly. The bike was pretty uneventful, grabbed some water/gatorade from friends, chatted with Aaron for a minute before he flew by me, saw 3 people on the side of the road with flats (yay for Oahu roads..not!), tried to get comfortable to no avail, tried to push the pace a bit, but wasn't successful in that regard either, so I just kept pedaling until I reached Camp Erdman. First woman to enter T2.

I wasn't happy with my bike at all...go faster next time and don't be a wimp, I think I might need to write that on my bars, don't be a wimp because that's how I felt I rode my bike on Saturday, like a wimp, I'm tired, my legs hurt, the roads are crap, my legs are heavy, are we done yet?, really 7 more miles to go?. Well duh! you are racing, it's not supposed to be easy and it's not supposed to feel good! Ugh, why I get into my own head sometimes and stay negative and pissy on the bike is something I seriously need to work on. Always something to learn and more work to be done. I got of the bike and it was time to run so I didn't dwell on it anymore. I knew Mariane was not far behind and needed to get running!

The run was a dark horse for me on Saturday, I have gained a lot of run confidence in the past year, but after my issue, and just beginning my run build again (not an excuse even though it sounds like one) I have a whole lot of work to do to get back to where I want/need/can be come October 11. Plenty of time for that. 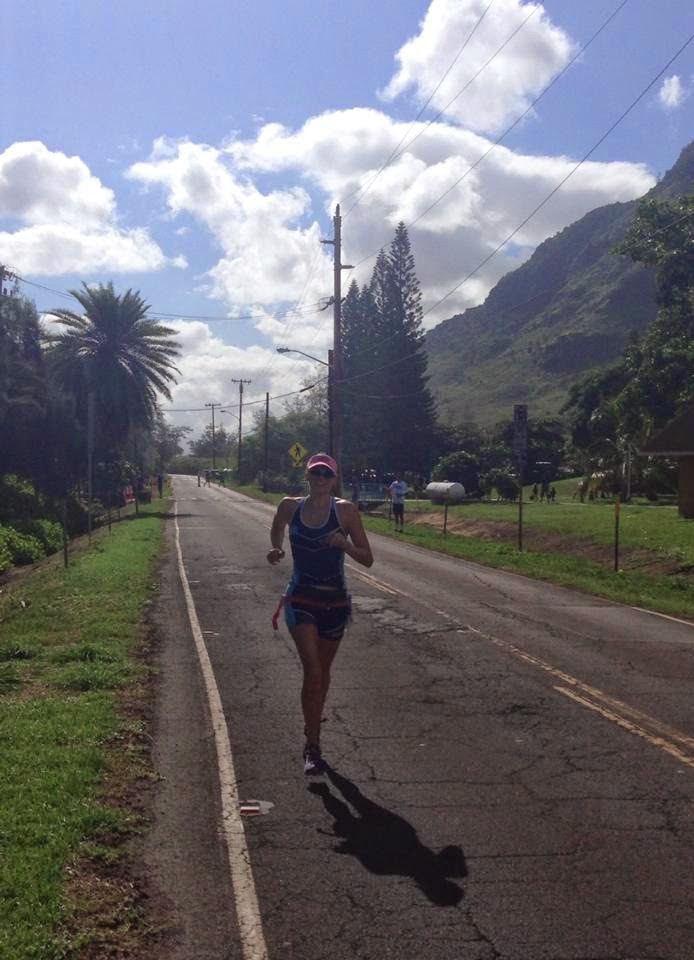 Anyways, the run was going to be brutally hot, and we all knew this. It is a 2.5 loop course on a fairly flat (two small inclines), super exposed (read no shade at all) road to nowhere. Plenty of aid stations and encouraging words from people throughout the race, you were never truly alone, which helps!

I started running and felt ok. Then I started to get negative, why, I have no idea, but this is also not ok. It took me probably 9 miles to stop being pissy and start running like I knew I could. That's waaaaaaaaay too long. Mariane passed me at mile 6-ish and I should have stayed with her, I believe I could have picked up the pace and stayed with her, but I didn't. Another lesson learned. Mariane and I chatted after the race and neither of us were in a very good place mentally and yet when we were racing we both thought each other was super happy and strong, all rainbows and butterflies. The run finishes right along the Ocean on a grass/beach section at Camp Erdman...beautiful. I was able to finish up the race, just two minutes back from Mariane and right behind Aaron.

The take away from this race....don't be a wimp, keep pushing forward and quit being negative. I think sometimes the biggest limiter in racing is our own minds. We've put in all the necessary work to have a great race, but if you let those negative thoughts creep into your mind it can ruin (this might be too strong of a word) everything you've worked so hard for. Being mentally strong is probably more important than being physically fit and capable of a great race.

I am happy with the end result, I put together a fairly strong race and am happy with how it all panned out. Being able to share the podium with these two ladies is always a great day! 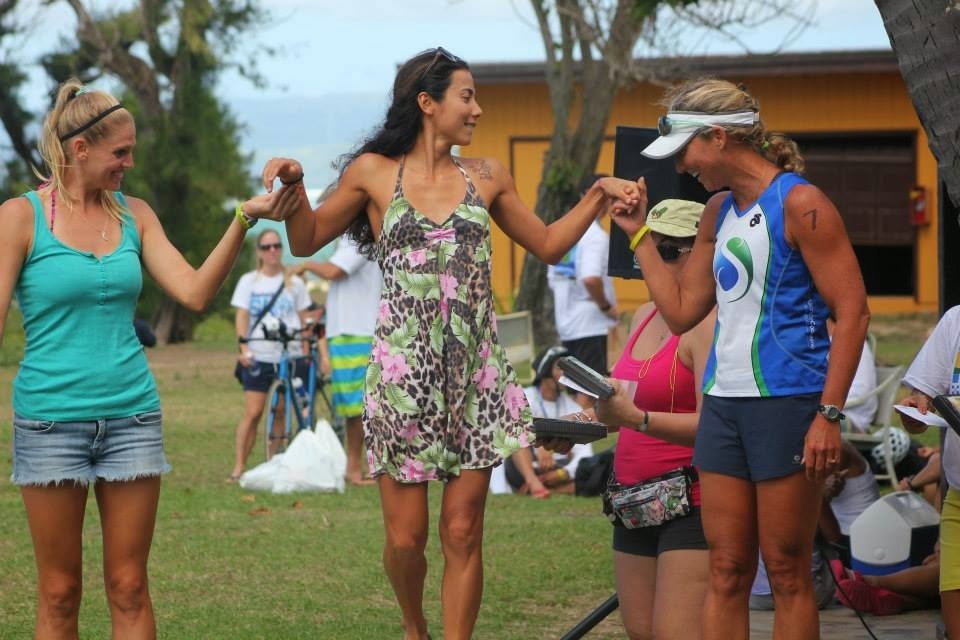 Thanks so much to all the volunteers (I think there were actually more volunteers than competitors in this race), without you, this race would not have been possible. Thanks to BOCA Hawaii for putting on such a great, family, community, fun race! I will most definitely do this race next year!!

(Thanks Kim Burnett, Rachel Ross and Kalani Pascual for the great pictures)

Posted by Unknown at 9:45 AM No comments: