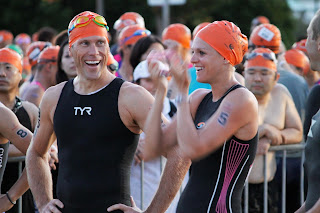 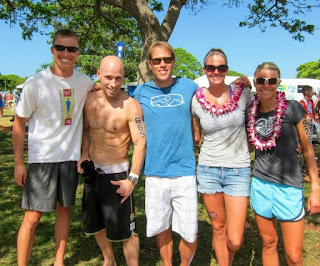 This was my third year participating in this race and another opportunity to work out the last kinks and get in another practice before Honu. This race is such a great tune up for Honu which is coming up quicker than I can even believe! Anyways....How lucky are we that we get to swim in the ocean (even though Ala Moana isn't the ideal place to ocean swim, it sort of makes me gag every time I get in the water there), ride through Downtown Honolulu on closed roads (and a police motorcycle escort!! I'll get to that later) and run in Ala Moana Park, finishing up at Magic Island (if you didn't get lost on all the crazy loops and U-turns on the course) on a gorgeous Sunday morning in May!? All the while playing and racing with great friends, both new and old. On Thursday night before the race, I remembered that I could sign up and race Elite this year, so I emailed the race director to change my registration to the Elite division. Last year the Elite division was full of all the girls I normally race, but I had no idea that was even an option so I raced normal age group. Didn't want to make that mistake this year, so I made sure I was signed up, well come race morning and there were only 3 women in the Elite Division!! Oh well. You gotta do what's right for you when it comes down to it right!?

The Elite wave took off at 5:45am and it still wasn't fully light out yet. I was a little concerned since I had only brought mirrored, polarized goggles (it ended up being just fine, but maybe next time I bring another option). By the time the gun went off it was light enough to see the buoys, crisis averted. 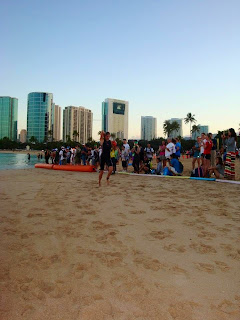 I've been swimming much more consistently and purposefully lately and it has shown in recent races. A couple of weeks ago over on the Big Island for training weekend we did some ocean swims and then we raced Lanikai Tri, I was able to stay within drafting distance (had we started together)of Tim in all of these instances, so my goal for the swim was to not let him get too far ahead of me and stay in his draft for as long as possible. I hate drafting in swimming. When you compete in the pool, you're always told to stay off the feet of the person in front of you or go around; competitive pool swimming is an individual endeavor, but in triathlon and ocean swimming it's a necessary evil and I'm trying to learn how to be more efficient and expend as little energy as possible while swimming in the ocean. I was able to stay right with him until the turn around and then he took off a little, but I was able to stay with 20 seconds of him and was right on his heels coming out of the water. Fastest Female swim of the day and 4th fastest swim overall. Mission #1 accomplished.
Swim 19:49

On to the bike...I'm getting there, I'm not where I want to be yet, but slowly I will get closer to being there. I was able to ride almost 3 minutes faster this year than I rode last year, conditions are always part of it, but I finally think I'm riding a little stronger than I was last year. So...the bike, started like any other bike portion of a race and about 30 seconds in a little motorcycle cop pulls out from a corner and starts riding away, I think nothing of it as you always see police patrolling the race courses, keeping traffic off the course and checking on whatever it is they check on, well he didn't go anywhere...he stayed right in front of me. Is this really happening?! Do I seriously have a police escort right now?! I thought for sure he would peel off and go do something else, but he didn't. Who knew I would ever be in the position to be leading the women's race and have a police escort?! It was not going to get taken away from me, it was way too cool! What an experience! I won't soon forget it and I sure would like to have that happen again!! I think that might have made me ride a little harder than usual and I was determined to keep that police man in front of me! It was a little weird riding without so much congestion on the roads, but I wasn't complaining. Who can complain with a police escort!? ok, ok, enough of that. I rolled into transition (didn't have a super fast bike, but it was almost 3 minutes faster than last year, so I was happy) and headed out for the run.
Bike 1:04 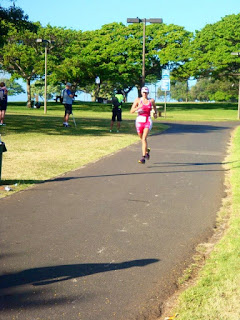 Here we go, 10k to go (I did hear it was a little short?), loops in Ala Moana. I've been working on my run lately, weekdays at the track, long runs, tempo runs, form, ocean running, hills, etc and I think it's coming along quite nicely. I've still got a bunch of work to do, but that's how we get better right? There's always something to work on.
I had my game face on for most of the run, just blocking everything out and focusing on one thing at a time. It's a fun run because you get to see people the whole time and you're never lonely out there. As worried as I was about making a wrong turn and going the wrong way, the course was very well marked as long as you looked at the maps before hand and I didn't get lost or confused once!
Everyone I saw was super cheerful and offering words of encouragement and just smiles, sorry I didn't respond to almost anyone, focus you know! I was able to run a 10k that I'm proud of (my fastest ever...maybe I should try racing a straight up 10k sometime to see what I can do.....maybe not though, that doesn't sound like very much fun to me). It wasn't the fastest run of the day (great job Natalia...smokin' 35, congrats!!) and it wasn't the slowest, it was right where I want to be right now. I did get run down in the last .5mile of the run, I did everything I could to try to let it not happen, but when you're racing girls that can run a 35 off the bike, I guess that's what happens!

All-in-all, I'm super, super happy with how this race turned out. 2nd Female OA against a fast group of ladies and a great stepping stone before Honu. A little over the week and it's game time!
Smiles,