Typically, Memorial Day is a day most people have off from work, it's a week before Honu and a big group of people usually get together and swim to the Mokes. Today was no different. 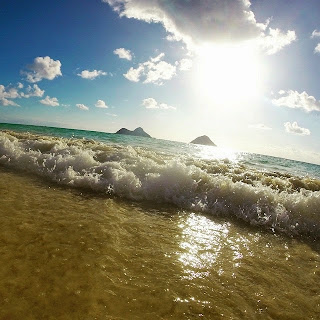 There were probably close to 100 people that swam out to these islands today (the biggest group I've ever swum out there with): a group of youngsters from the local swim team, Aulea, the BOCA Hawaii fam, Kailua Masters peeps, Kaneohe swim crew, UH masters folk and some local ocean swimmers and triathletes, to name a few. We all took the opportunity to enjoy a little piece of happy Hawaii has to offer. 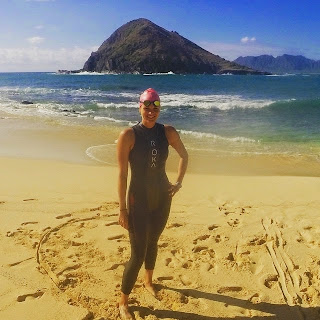 Not a bad way to start a Holiday Monday! Thanks to all who serve(d)!
All gave some, some gave all. 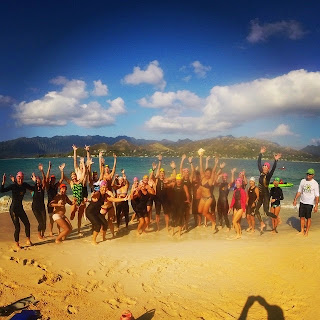 GoPro Pics thanks to Stacia and Kimi!
Posted by Unknown at 3:03 PM 2 comments:

Sunday was the inaugural North Shore Triathlon. This race took place, as the name suggests, up on the North Shore of Oahu at Mokuleia Beach Park. I'm going to quote a friend, Sergio, because I think he put it best, "This weekend people had two races to choose from. One is a relatively flat course with thousands of people racing different events and running around cones. The other was a much more challenging and beautiful course with all your closest friends. #NoBrainer #NorthShoreTriathlon." #FTW. 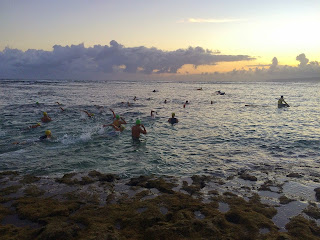 I couldn't be happier with my decision to race this race, it was a great prep for what's to come in a few short days. A chance to get the kinks out, race hard on a beautiful, difficult course that's never been done before, but do it in a SAFE environment where you don't have to worry about other things (getting lost running around cones, people riding bike in the wrong direction, passing on the wrong side, while worrying about getting hurt, run over or crashing). 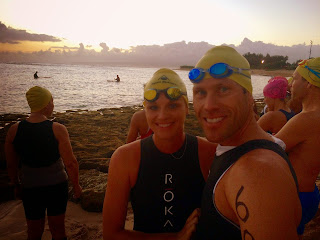 On to the actual race....What a morning it was! 5;45am comes fast when it's about an hour drive to the start. The swim, although it was a short (I guess Olympic distance race swims should be longer, but who cares?! everyone has to do the same thing, the length of the swim is the length of the swim! as is the length of the bike and the length of the run!), it was NOT an easy swim by any means. It was 2 loops of about 400-500meters, the water was shallow and navigating was difficult, adventure swimming at it's finest! I swam with Jason Hagi, a local swimmer extraordinaire (his goggles snapped right before the start and he swam the whole race without goggles, kudos to him!) and a few times we both stopped, looked at each other and said, "where do we go?" The course was difficult to navigate, swimming back in towards shore (a bigger flag or something instead of a small cone on the beach would be helpful! :-) ), but it super fun. It would be cool to have it be a longer swim in the future, but not necessary. I ended up F(woman)OTW and we had a kind of long, deep sand beach run up to transition. Not what I was expecting, but knew it wasn't going to be easy given the walk down to the beach before the start. 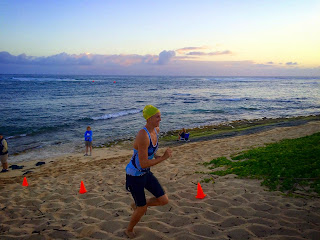 On to the bike! I LOVE MY NEW BIKE! I'm finally comfortable on my bike in my TT bars and it climbs like a beast. This bike course was epic. There's this road here called Snake Road, (well that's not its real name, if you want to look it up, it's actually called Kaukonahua Road) , that we can't/don't normally ride up because it's super unsafe, there's no shoulder and people drive like maniacs up and down that road. Chris, the race director was able to get full road closure so we could ride up this amazing road allthewhile being safe! I loved this ride, the roads were clear of cars and I got a police escort!! Love that! Only 1 complaint, was the shameless relay boys drafting while climbing up hills, but I suppose people don't like to get passed (I get it, but come on! Race your own race!). Anyways, the bike was tough, it's only a 3.5 mile climb and then some rollers, but those 3.5 miles were no joke! After that it was a fast descent back down to the 4 mile flat back to transition. I was pushing the pace a bit, but in retrospect I probably could have and should have gone a little harder (can I pedal any faster? yes, can I push a bigger gear? yes. Not great answers once again). I'm learning, but it seems to be a slow process. My mind needs to catch up to my body! 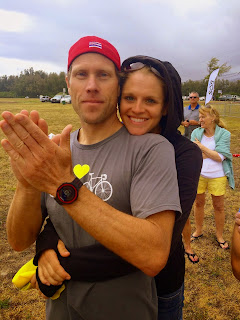 The run was a short out and back on a relatively flat course, with a few small bumps, right along the ocean. Couldn't ask for more beautiful scenery! You got to see everyone the whole time and the encouragement and cheers from everyone is always welcome and motivating! The run ended up being a little shy of 10k, but that's AOK with me. Again, everyone running the same course! And guess what?! Police motorcycle escort on the run as well (poor guy having to ride that motorcycle sooooo slow, you could totally tell he was uncomfortable standing up, squirming around and having to ride his bike at a regular pace for a little and then come right back to me. He even apologized for not having his fancy bike with a radio for music, now that would have been a bonus)! 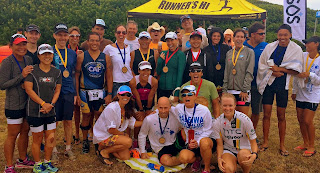 I wanted to push the pace from the beginning, but didn't have the spunk I would have liked. I was able to run comfortably uncomfortable, but not as fast as I planned/anticipated. I wasn't running with a Garmin or anything, but could tell it wasn't super speedy. In the end it was enough and I was happy with how the day unfolded. Got to get the kinks out and be ready for Honu in a few short days! 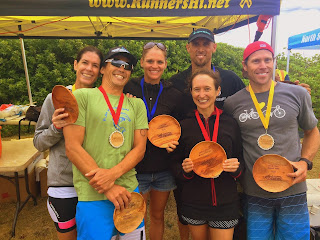 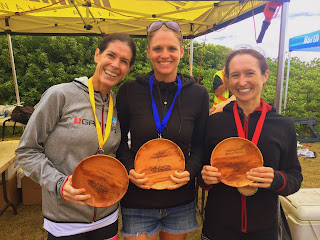 Thanks Chris Gardner and BOCA Hawaii for putting on such a great event, I can't wait for next year as I can only see this event growing and becoming more successful in the future.

This past weekend was full of racing. On Saturday, a new swim race came to town, the South Shore Classic. If you are a swimmer and live on Oahu or happen to be visiting at the time of this event next year, I highly recommend checking it out! It's a pretty unique race, something I've never seen before in Ocean swim racing (not that I've seen it all by any means). 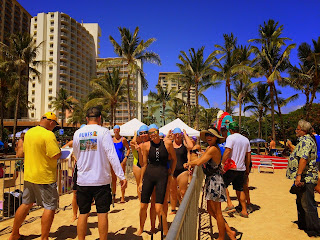 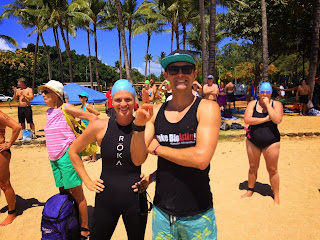 Here's how it works. There are actually 4 different races: Women's 1-mile, Men's 1-mile, Keki, and the Elite 2-mile (men and women) races. The Women's 1-mile race started at 2pm (what?! a race starting after 6am, that's amazing!). Anyways, at 2pm women 70 years of age and older start, 1 minute later women in their 60s run into the water, 50 seconds later all the 40s head out, 40 seconds later the 30s and 30 (or 20, I can't remember) seconds later if you are 29 or younger you go. The course was two, 800meter loops with a short beach run in between and the first person to cross the finish line, regardless of start time or age is the winner. At 2:45ish the Men's 1-mile race started and followed the same format. The keki race began around 3:30 with a similar format and then the  big one, the 2-mile race around 4:15. I'm not exactly sure of the start times of this race, but the women and men were all in one race, the women got a head start on the men (I think 3 minutes?) and then the men started, again the first person to cross the line regardless of gender or start time was crowned the South Shore Champion. Super cool format! 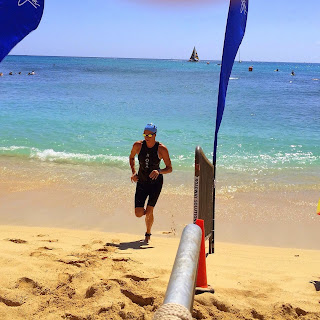 I decided, on a whim to sign up for the race on Saturday afternoon. Aaron was water support, so I was going to be down there anyways and why not?! I hadn't been feeling that great in the water and wanted to dust off the cobwebs and a short, fast swim race is just the way to do it. I've been swimming a ton and knew I was swimming well, but sometimes  you just don't feel good in the water, so this was an excellent idea. 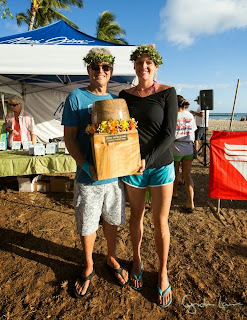 The race ended up going swimmingly, I went out fast and found my groove, swimming through a bunch of people. The water was crystal clear and there was a bit of a current and some waves on the way in to shore, but nothing too crazy. By the last buoy on the first loop, I caught Miki who had also swum through a bunch of people. Out of the water and onto the beach, short little run and back in for the final lap. I had clear water and a paddle board escort for the remainder of the swim, not so bad. There was a bit of surf coming into the beach on each of the laps and it would have been nice to catch a wave and ride it in to shore, but the surf was not in my favor and I missed every one that came by, oh well. Not a bad way to spend a Saturday afternoon. 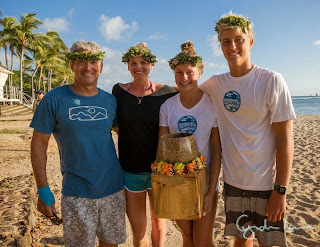 I couldn't be happier with how this race went. For the inaugural race, it seemed to go off without a hitch, at least from a participant's stand point. I know there's a ton of work that goes on behind the scenes to make a race like this, or really any kind of race happen, so congrats! I'm super stoked that I was able to participate in the inaugural year and am already looking forward to next year...maybe I'll take a swing at the 2-miler (as long as there's not another race the next day). 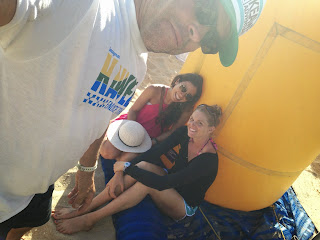 What a great idea, Thanks Todd and John and Raul and everyone else that helped you three get this race off the ground and for your forward thinking which created something new and exciting here on Oahu!


The race even scored a write up on the Open Water Swimming Daily Website. That's pretty cool.

up next...North Shore Tri write up!

Posted by Unknown at 4:47 PM No comments: