1. I think this is going to be really difficult.

3. This is an easy one..I started swimming competitively at age 6.

4. After college, I never thought I would swim again. Nor wake up in the morning to swim. Never say never...

5. I LOVE swimming again and wish I could swim with more people more often. I do a lot of swimming on my own.

6. I want to start swimming on a master's team, I just need to MAKE the time to go the first time.

7.. Swimming in the Ocean is fun...I'm just starting to really appreciate the ocean and what we are so lucky to have here year round (crystal clear water that's not very cold)...even though it's kind of sort of wetsuit swimming weather in the water now.

8. I grew up in Syracuse, New York, UpState, not the city, they are two totally different things. My parents still live in the house I grew up in.

11. I haven't put this out there, on the world wide web, but in all honesty...Came to Hawaii, married, thought I was happy, pretended I was, I wasn't, I stayed, he left and I couldn't be happier with where my life is now.

12. Not sure how I feel about putting that little tid bit out there.

13. I am truly the most happy I've been in a very long time.

14. When I got to Hawaii in 2009 I was super out of shape....30 pounds heavier, out of shape
15. My college swim coach had been trying for years to convince me to do a triathlon to no avail..he finally convinced me to do a marathon and thus began my journey back to fitness.

19. I stand by the fact that an Ironman marathon is "easier" than an open marathon

22. I've been skydiving, it was amazing, not something I ever thought I would do and I don't think I could ever do it again, but glad I had the experience.

23. I have a tattoo on my right foot, a hibiscus flower that I got when I first got to Hawaii.

25. I used to only wear black swim suits, not the brighter and more obnoxious the better.

26. I have my master's degree in School Counseling.

27. I work in a middle school as a Behavioral Health Specialist

28, I want to get my spin instructor certification.

29, I miss being a swim coach and I want to start coaching swimming again in some capacity.

30. Triathlon has given me some amazing friendships and relationships.

33. I love having a coach to guide and push me to and past my limits as well as reign me in when needed.

34. I have a younger brother that lives in Maine, way to far away in my opinion.

35. We used to drive each other nutso and now I wish we lived closer and could see each other more often.

36. The one bad thing about living in paradise is being so far away from friends and family...but at least it's a great place to visit.

38, I would love to go back to Europe and explore some more countries, but it's such a trek from here.

39. Someday I want to go to Australia

42. and bike tour a whole bunch of other places

43. I tore my ACL in high school when I went skiing with a boy.

45. Didn't have ACL surgery until after I was done with college swimming (that's how I got out of all the running!)

46. and now I love running...I can't believe I just uttered those words, but I've said it before, I really do enjoy running.

47. Only other surgery I've had was getting my wisdom teeth removed and that was terrible!!

49. Hopefully I can figure out the electronic shifting and I don't break it..yikes!

50. Hawaii turns you into a wimp...my blood has thinned and now I think high 60s and low 70s is cold. I swear I grew up on the east coast and know what REAL cold is.

52. I take that back...I miss the first couple hours of snow: the slush, dirty, brown, nastiness that snow turns into after it first hits the ground, that's what I don't miss.

53. I was on a bowling league with my mom when I was in grad school (I have my own shoes and ball)

55. I used to play baseball and softball

56. I was a cheerleader in elementary school (gasp!)

57. I also took dance, tap and ballet when I was super little (not evidenced by my killer moves on the dance floor now).

58. I also did synchronized swimming for a year before competitive swimming

59. When I started swimming for real, I was so excited I said, "I can't believe they swim back and forth and back and forth in the pool, this is so fuN!!"

61. One of my favorite trips was a girlfriends trip to Napa

62. We need to make these happen more often, but babies and distance make it tough. thank goodness for texting and email.

66. I just learned where my name came from..kind of!

67. My grandmother's name was Electa, when she was little, they called her Lectie (I knew that).

68. Her father was a member of the free mason's and their symbol or something that has to do with the group is a 6-pointed star and one of the points on the star is called Electa, so that's where my Grandmother's name came from and then my name came from hers.

70. I really enjoy reading and have been in to non-fiction lately...just read "The Boys in the Boat," highly recommend it.

72. I spend way too much time on my phone

73. I like reading blogs and social networking, social media and feel like I know so many people out there in blogland...creepy? Not sure,but it's fun to have a "connection" to what's going on out there in the triathlon world.

74. I love cooking and sometimes wish I would have gone to culinary school.

75. A cooking class would be super fun. There are cooking classes that happen at one of the community colleges here and I WILL go to one of them sometime.

76. LOVE farmers markets. Have started going much more this year and how much better is fresh, local produce than what you get at the grocery store?

77. Kombucha...I'm addicted and I need a mother...anyone in Hawaii have one so I can start to make my own.

78. I think making a cookbook would be fun, but I would have a hard time writing actual recipes

80, This is kind of fun, but a little scary at the same time

81. I hate having dirty dishes in the sink

84. I used to be scared of the ocean. Now, big waves are intimidating, but I will go swim if there are waves and the choppier, the better.

85. I lifeguarded all through high school and some of college

86, I was a "cart girl" at a golf course a few summers in college

88. I get airsick (not on commercial flights, but on little flights and glider planes, whoops)

89. I want to go in a hot air balloon, but not sure if that's the greatest idea

90. I would love to get my Scuba cert

92. The longest I've ever swam was 7.5 miles and it was on accident

93. I want to see the Northern Lights

95. I hate not being organized or having a messy desk/work area

96. I like making lists, and lists on paper. Crossing out what is done is so satisfying.

97. Paper calendars/planners are still in my life (I can't get used to electronic schedules)

98. I love sleep and am in bed pretty early most nights (read 9pm)

99. I'm much better about icing and stretching and taking care of my self in this past year than I have been in the past. Being a swimmer, I never really stretched, rolled or iced much (well I iced my knee), but that is something I've learned is a very valuable and important thing to keep up with

100. Family and friends are the most important things in life.


Welp, that wasn't terrible, but hitting publish is taking me a while....I challenge you to try this! It's not as easy as it seems!

Yesterday was the 12th Anniversary of Sharon's Ride. This ride serves as a memorial to Sharon Rosenfield, nurse and teacher who was killed during a cross country bicycle ride in 1993. She was deeply involved in supporting epilepsy and epilepsy patients.
"Sharon's Ride Run Walk for Epilepsy was started in 1996 in St. Louis, Missouri by Dr. William Rosenfeld and Dr. Susan Lippmann, neurologists who specialize in epilepsy and who created the event to honor the memory of Dr. Rosenfeld's sister. Sharon's Ride takes place at 7 sites across the country, Honolulu being one of them." 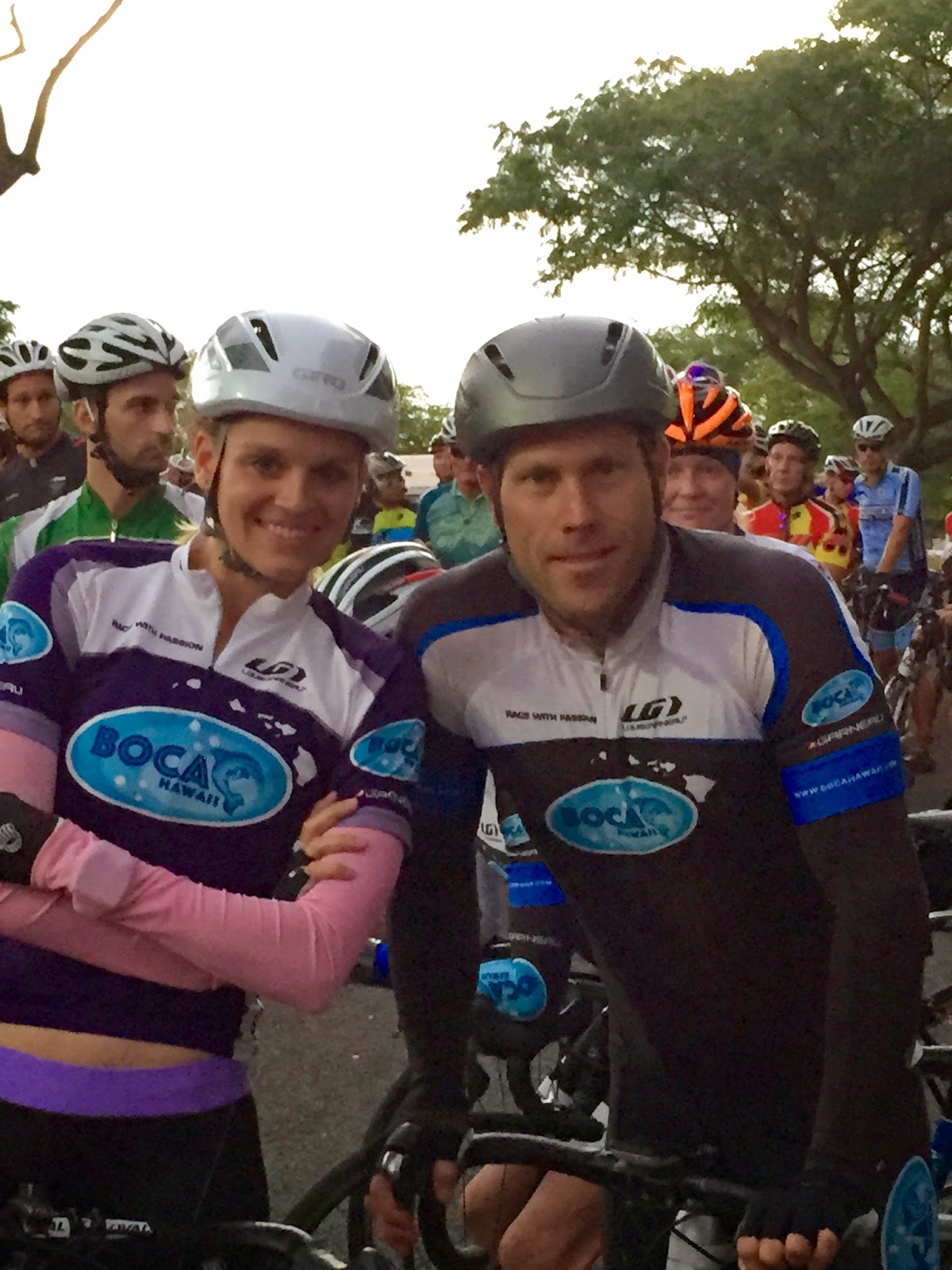 It was wet, it was rainy, it was chilly, it was hot, it was sunny, it was windy, it was a quick 100k AND it was a great morning spent with friends who like to ride bikes. AND I got to try out my fancy new aero helmet that Aaron got me for Christmas. It was comfy and warm, great for a colder day here in Hawai'i. Everyone thinks he looks like RoboCop in his, so I suppose now there will be two RoboCops out there riding bikes. 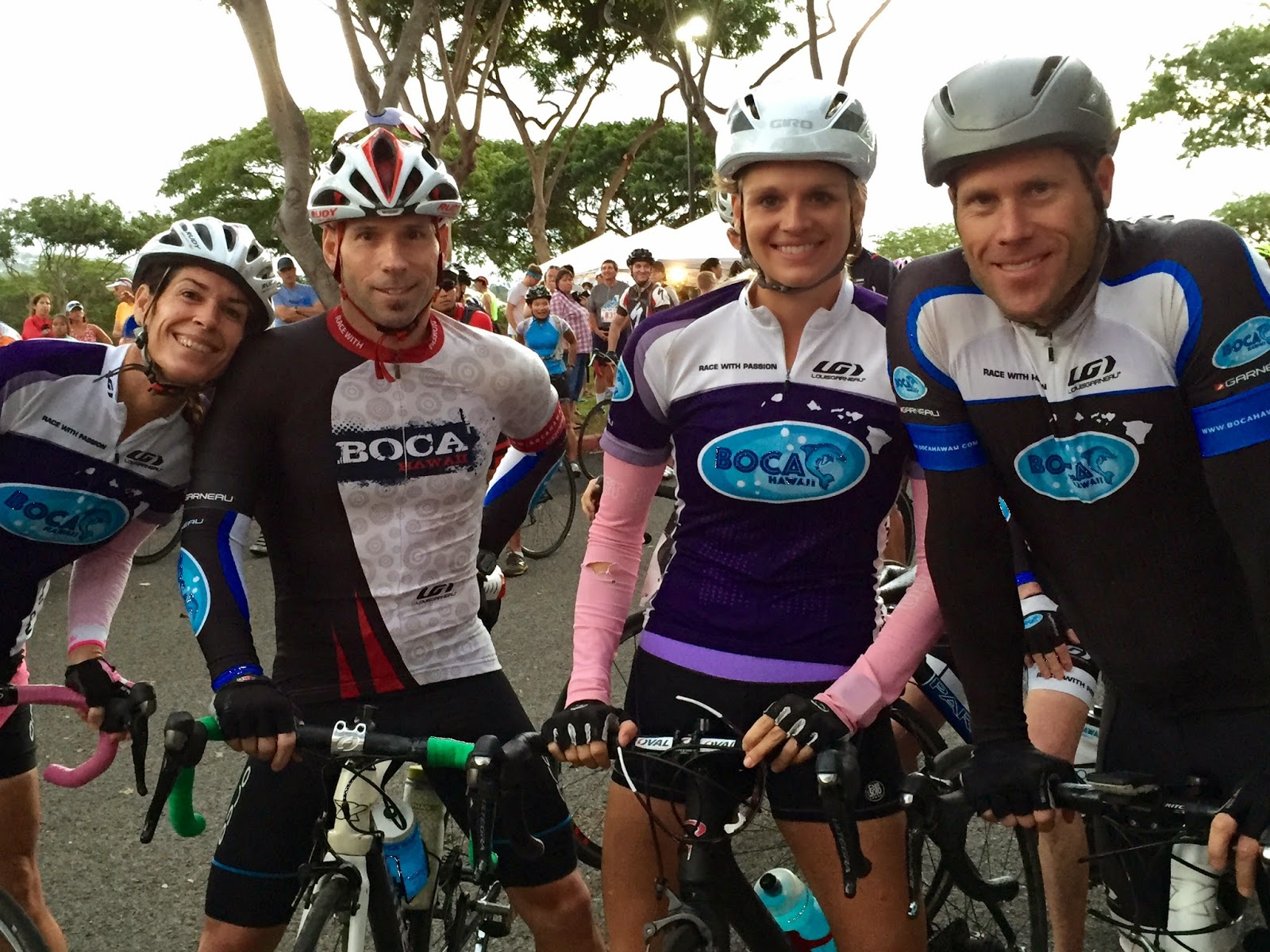 Not a whole lot to say about this...pretty much the same as last year...hold on for as long as possible then ride strong and hard the rest of the way. I held on for a shorter amount of time this go around, but I ended up with a faster and more consistent ride this year when compared to last (I know conditions can dictate pace and time so I shouldn't look at time as a predictor of fitness). Even though I wasn't able to stay with the big boys (and Michelle, and Chiyo) for very long, I do think I had a better, stronger, steadier ride this year. 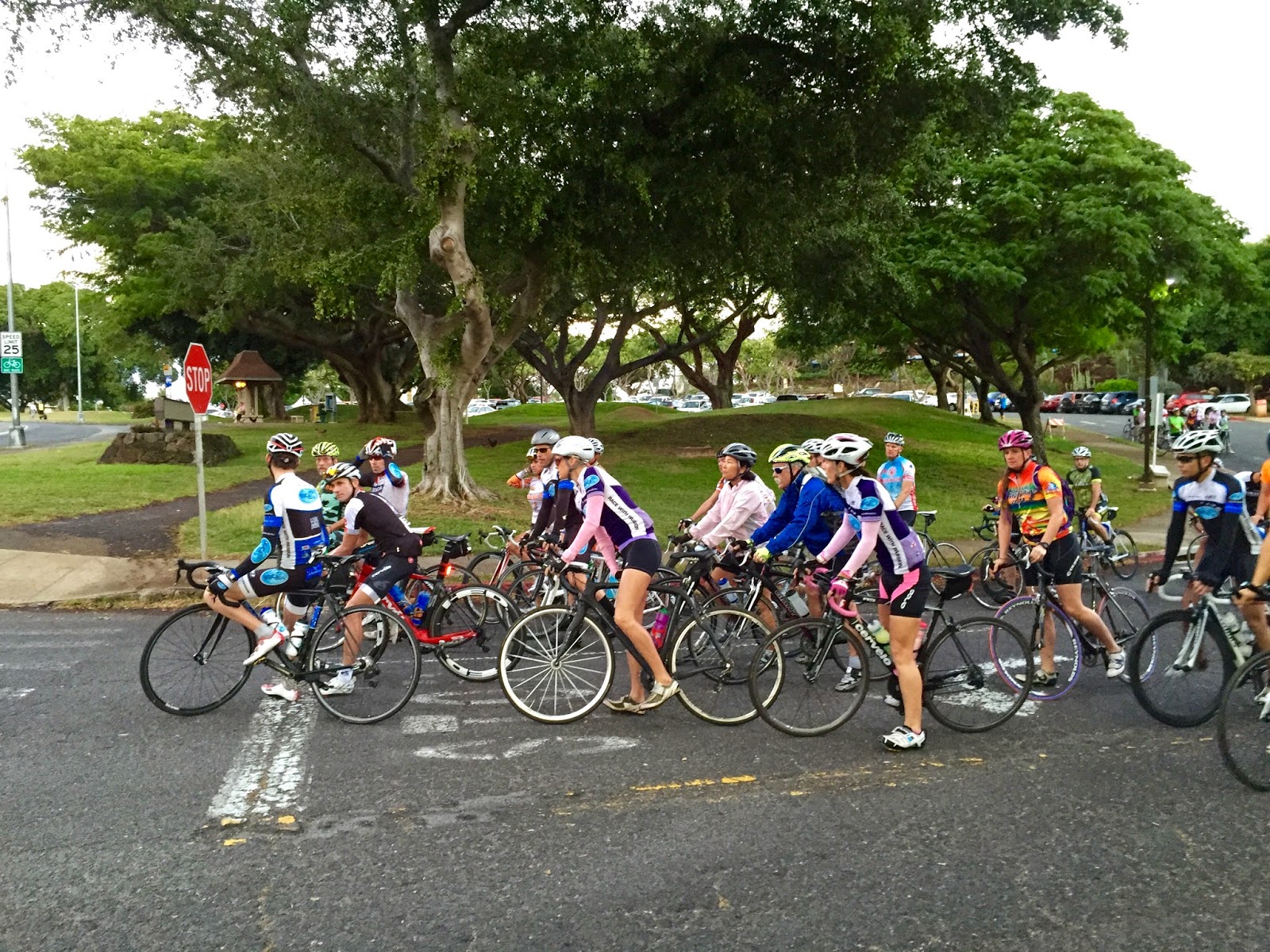 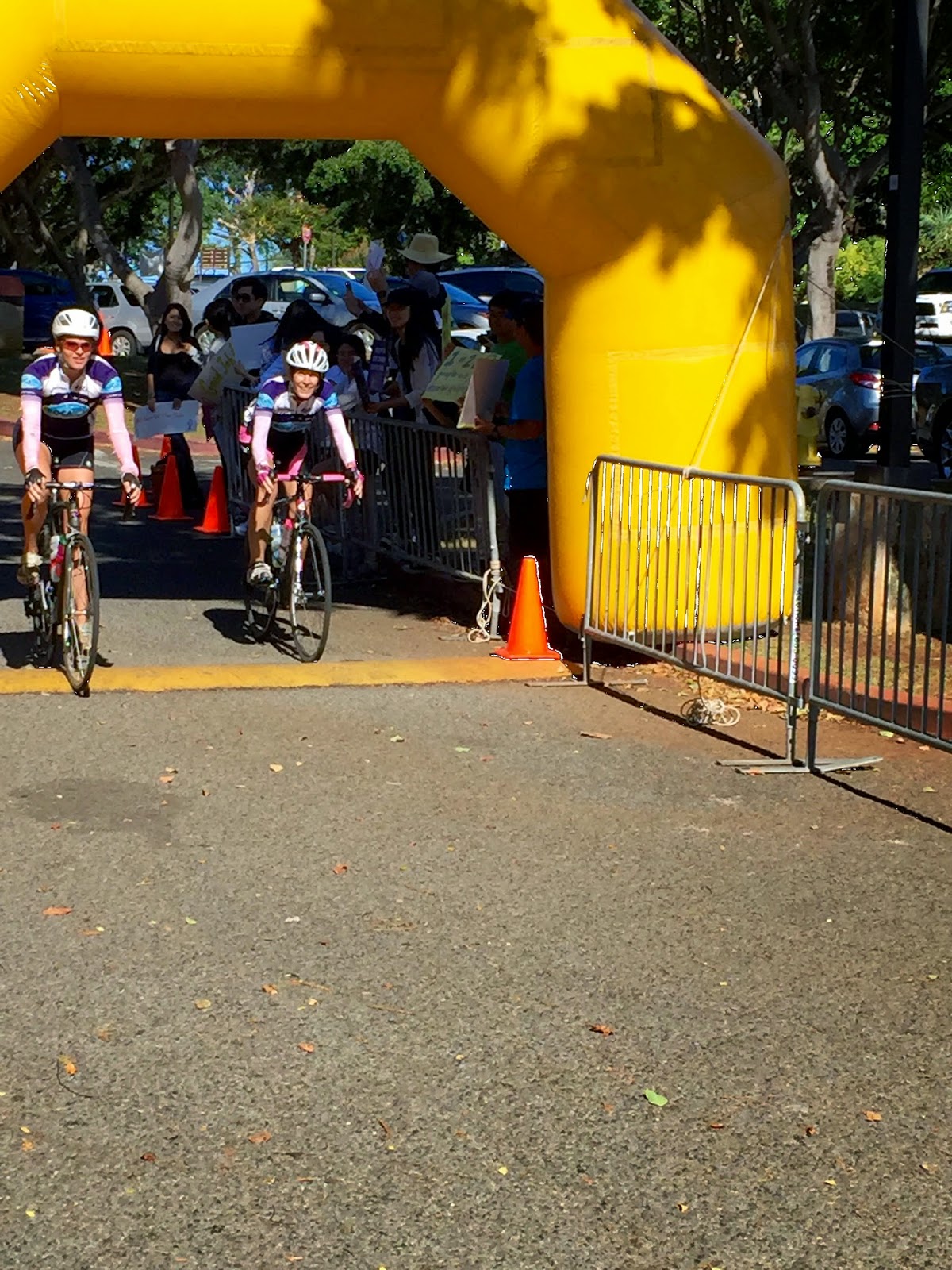 A big, huge thanks to Michelle for hanging out at the top of Makapu'u and waiting for me because without her, it would have been a very lonely, windy sufferfest out there on my own. We were able to ride the rest of the time together trading pulls and pulling a whole bunch of boys around the island. No shame there, seems quite typical for this ride. If you can't hang with the big boys, the next group just lets you pull them around (after they skip one of the loops for a snack break and hop on to catch your draft). We prefered it that way though, pulling and setting the pace rather than drafting and getting an easy ride. On the last climb we dropped them all and rode to the finish strong, together. Better watch out for this girl come June and Haleakala. 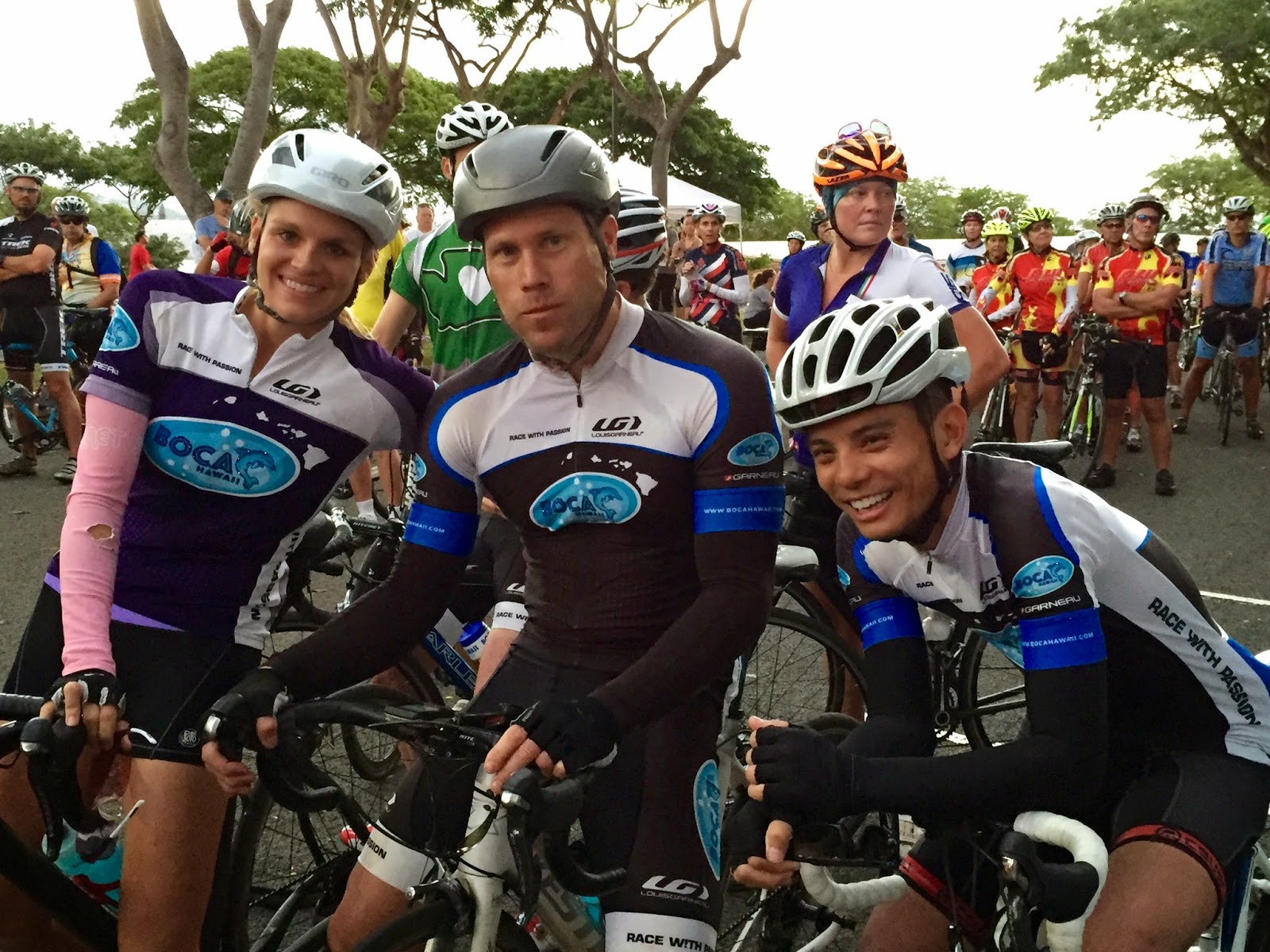 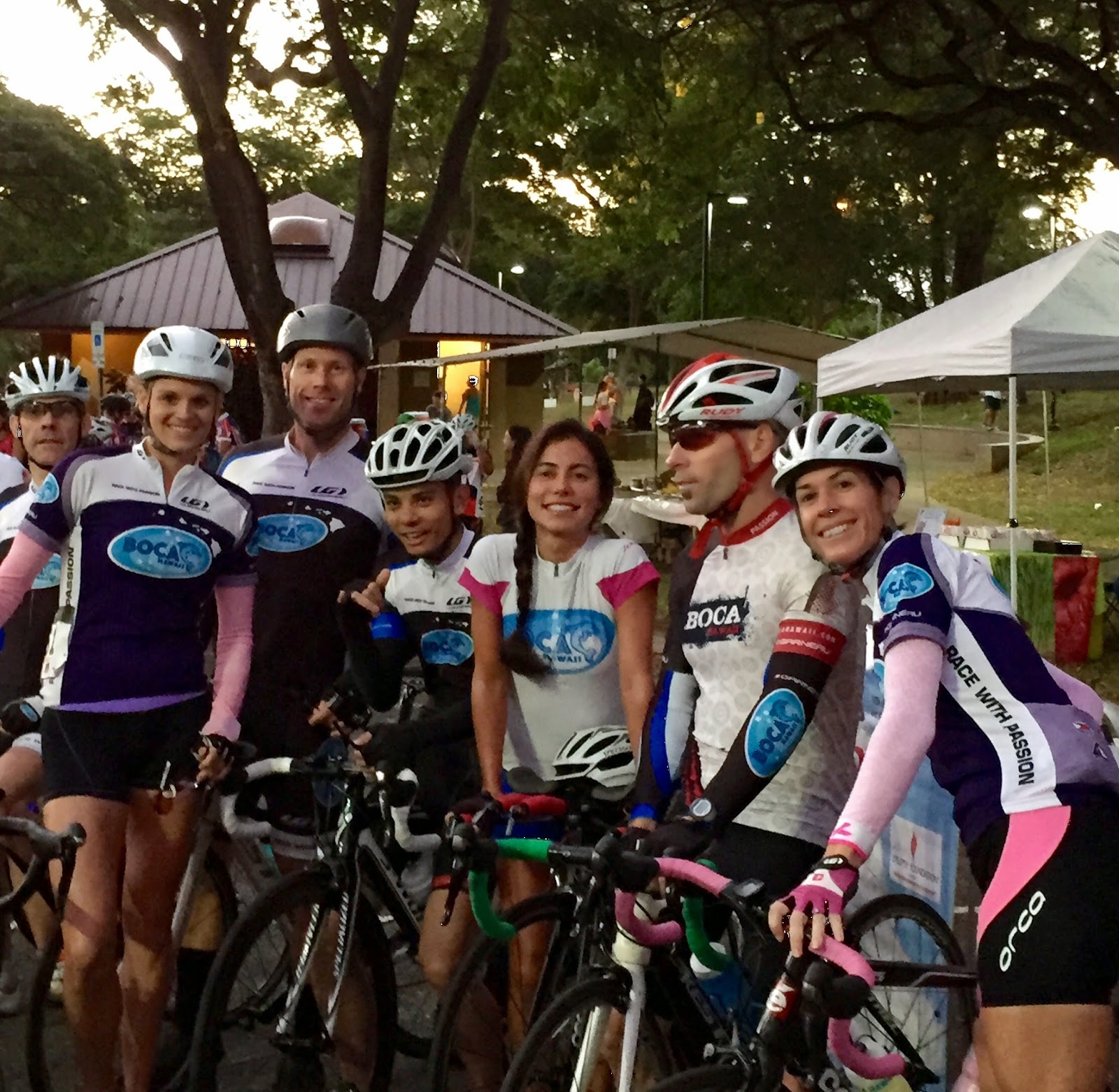 If you're up for a fun, fast, police escorted (if you can hand with the lead boys), supported ride, this is one you should for sure check out. A great event, for a great cause....until next year.....