I was fortunate enough to be invited over to Kauai, by my friends Mei and Thad (and Lisa, race director) to participate in the inaugural KPAL Hammerhead Sprint Triathlon (a fundraiser for the Kauai Police Activities League). First and foremost, thanks, what a weekend!! 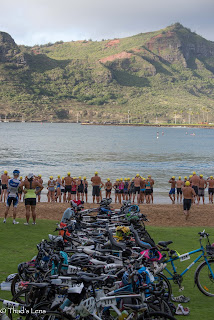 If you get the chance next year to head over to the Garden Isle, plan it around the KPAL triathlon, you won't be disappointed. A super fun, local, low-key, grass-rootsy, everyone supporting one another kind of race. Not so bad, in my opinion.

Swim....the swim was about a 500 meter swim in Kalapaki Bay. Not the most beautiful, crystal clear water you get in Hawaii, but ocean swimming is almost always a good time. It was a short and sweet swim, very protected, mellow surf, with plenty of water support. Perfect for first time ocean swimmers. 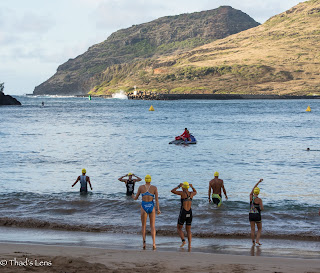 Bike...the bike was just over a 14-mile, 3-loop ride starting at Kalapaki Beach, heading up Kalapaki Circle aka Ho'Olaulea Way and turning onto the Kapule Highway. Once on the highway we completed three laps from the North end of Vidinha Soccer Fields to the junction of Kapule and Kuhio Highways and ended back at the Stadium.

3 loops in 14-miles, you would think a road bike would be the best option, but think again, it's not as technical as it sounds, only one U-turn (that you have to do three times), but other than that, there's plenty of time to get down in your aero bars and hammer! The ride starts out with a fairly steep incline to get out of the Kauai Marriott Resort and then it appears as if it would be a pretty flat ride afterwards, but you get a nice false flat for part of each of the three loops once you are out on the highway. Another important thing to note is that the highway was COMPLETELY closed to traffic, so all 4 lanes were available for us riders, super safe, fun, fast ride! 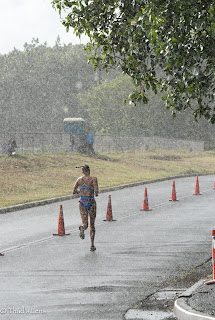 Once we started the run (of the triathlon), the 5k fun run was already underway so there were plenty of people out on the course directing traffic and making sure everyone knew where to go. The run was 2/3 flat with 1/3 of the run being that same portion of the bike I talked about above, getting into and out of the resort. And how fun is it to get to finish the race with a little loop around the track!?

I think the best part about the race, as is the same in most all races, for me, is getting to race in new places with other people who want to be out there, having fun, doing something we love and enjoying the day. If it's not fun, then why do it?! 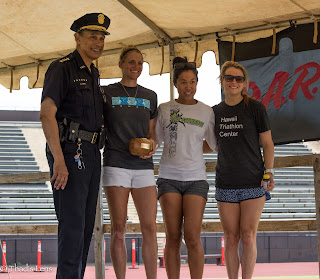 I look forward to racing next year, and you should too!

Here's a link to the newspaper article recapping the race