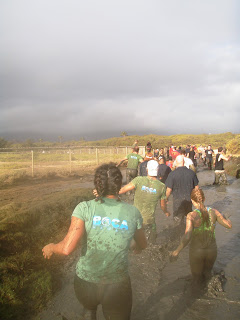 Every year here, the Marine Corps base puts on a little race called the SWAMP ROMP. The swamp romp is basically a five mile race through the muddy, deep, smelly, dirty swamps and a little bit of nice ocean on the the base. Sounds enticing right? I never thought I would enter a race like this ever, but what the heck, a group of friends out for a five-mile romp in the swap, sure sign me up!

The course takes you over and under obstacles, through the ocean, under camo nets and up and over walls. It's a five mile fun fest that you get to complete with five other people.


One of our friends suggested entering the race a few months back and I though to myself sure, why not, it sounds kinda fun, I'm in! I totally didn't think he was being serious when he asked and to my surprise, about 2 weeks before the race I get an email that was sent to myself and 4 other people from el capitan Iovo. I guess he was serious when he asked about this race...note to self be careful what you agree to when Iovo asks!


Now we needed to come up with team costumes or outfits or something to wear since apparently at this race people dress up in crazy outfits and have a good time. Well being the boring, non-creative, triathletes that we are we decided to be team BOCA triathletes. We headed over to the shop and picked up some t-shirts from Raul and that was that. Green BOCA shirts and black tights, that was the costume. Simple, easy and something we all had. (this ended up working out perfectly) 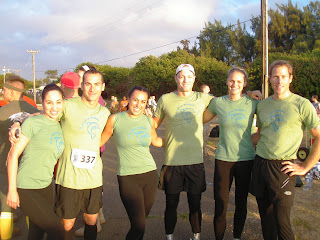 Race morning: wake up 4:15am. It's like I was getting up for a serious race or something. Got dressed and headed over to Kailua for some per race prep, aka duct taping on the old sneakers so they didn't fall off in the mud. Note to self: if I ever do this race again, I need to figure out a better way to keep on the shoes, my achilles and front foot is all cut up from the rubbing of the tape...not pleasant! We all piled into the truck and headed over to MCBH.

We had a late start time to we just wandered around (after I ate it for the first time walking over to the start...super embarrassing, but I am clumsy, oh well) waiting for our time, checking out costumes and people watching, I wish I had better pictures of some of the getups people were in, it was definitely a great way to pass an hour. 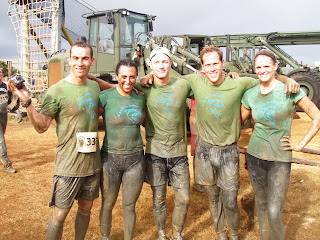 Finally it's our time to go. We started the race with 6 people (you only need to finish with 5 to officially finish). We had every intention of just running the race, having a good time and all finishing together, but after about 2.5 miles we ended up a group of five. Anyways, the race starts out and they don't hesitate to get you dirty, you head right down into a trench of mud and gunk and water. They don't call it the swamp romp for nothing. There's a lot of in and out of water, mud, and dirty for the first bit of the race, with a few obstacles thrown in there (things to climb over, nets to crawl under in the sand once you are already dirty and wet so the sand sticks nicely to your skin, etc). After that a what feels like forever beach run and then it's a good little stretch of flat semi fast trails where you can just book it. Some more obstacles and then the real swamp...Just think mud up to above the knees, shoes getting stuck, sewer smells. There was no running here, just trudging through, after that it's the home stretch a little jog on the grass then the finish. We crossed the finish line, hands held/arms linked in 1:06 and ended up 3rd in the mixed division. Go us!!


All-in-all it was a great day and I would totally do it again (but next time I'll have a better keeping the shoes on method).

A few more pictures from the day.... 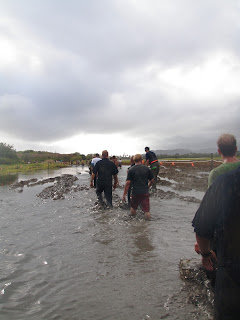