I've been enjoying the post-marathon recovery time before we/I start to get going with IMCdA training.  Dave and I were fortunate enough to be able to hop on over to another island for Christmas. Since we've been in Hawaii for the past three years, we have always talked about vacationing to Kauai so we could hike and see the beautiful Na Pail Coast. Well, we finally got the opportunity and we were off to Kauai! We spent the long weekend hiking, exploring and seeing all that Kauai has to offer. I'm sure we missed a bunch of important things, but the weekend was jam packed with super fun activities. 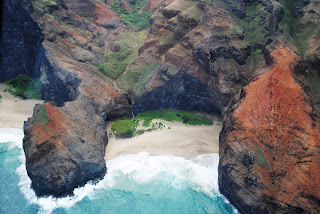 We arrived on Christmas eve morning and had a helicopter tour of the island scheduled. I know we were both pumped for this. I had never been on a helicopter before and was excited to get a birds eye view of the island so we could plan the rest of our trip. The flight started off calm enough and then our pilot asked if we wanted to take the bumpy route (more scenic) or the smooth route.  Well, Dave and the other couple on the helicopter voted for the more scenic route, read more bumpy and likely that Lectie gets sick route, so who was I to say no and "ruin" everyone's experience. I can tough it out for an hour, it won't be that bumpy.  That probably wasn't the best idea I've ever had. The helicopter tour was amazing for the first 35 minutes. The most gorgeous views and scenery I've probably ever seen. It was a bit bumpy (the helicopter would drop 10-15 feet at a time and I might have felt like we were going to fall out of the sky) as we were flying through clouds and a little rain and after about 30-40 minutes of that my body did not agree with what I was doing. Now, a helicopter isn't like a plane, obviously, you can't just get up and walk to the bathroom and splash some water on your face to make yourself feel better, you are trapped! I was still taking in the scenery and enjoying that part of the trip, but I was also seriously trying to keep myself from being sick (which didn't happen) and ruining the tour for everyone else involved. After my little episode, i felt much better and was able to enjoy, again, the last 10 minutes or so of the ride. 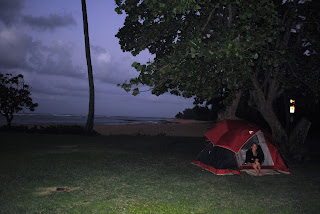 After the ride, we were gonna camp it for the night, wake up early on Christmas and start our hike. Before that we did a little exploring and found some pretty cool caves. 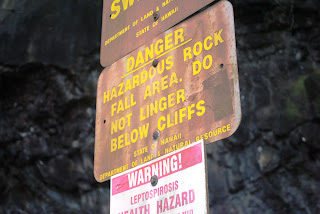 The plan was to do the 11 mile hike, camp at the end and hike back out the next day. We started early enough, the views and the trail were amazing; it was super, super muddy and slippery, probably a good idea that we decided to wear our five fingers because of all the river crossings there were. We made it to the first beach, took a little break, had a snack and then continued on our way.

We went about a mile further than the first beach and the hike started to go up...and up...and up...and up....and it just kept going. We were climbing which wasn't physically intense, but I'm not so good with heights and we were right on the edge of the mountain/cliff and the ocean was directly on our left with no protection. I was getting a little uneasy and I think at that point Dave and I psyched ourselves out and decided to turn around and hike to the waterfall. (In retrospect we should have just kept going, we would have been fine and we were just being babies, oh well, next time). 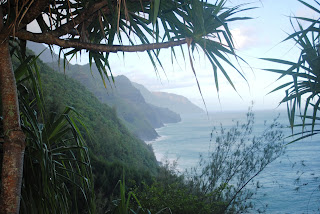 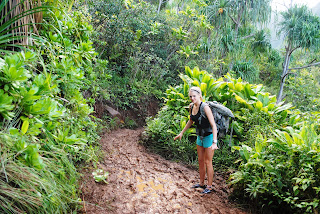 We hiked the mile back and then hiked another 2.5 miles in to the waterfall, great decision, the waterfall was awesome. We had a great time! After the waterfall we decided to hike back out (at the end of the day we totaled closed to 11 miles of hiking for the day, not to shabby) and find somewhere to stay for the night. We got a place at the cute little Inn in Hanalei.

Got up the next morning, had some Cinnamon Buns from Java Kai in Hanalei, did a little more sightseeing and stayed at a hotel in Leihue the next evening.

Drove out to Waimea and saw Waimea Canyon, it's supposed to be the Grand Canyon of the Pacific. Well worth the hour + drive to get there. I've never been to the Grand Canyon, but if it's anything like this, I sure want to check it out! While we were driving up to the Canyon, approximately 3400ft above sea level, we saw this crazy dude riding his bike up there! If you want practice climbing, this is the place to go for sure! It looked fun in a miserable sort of way. 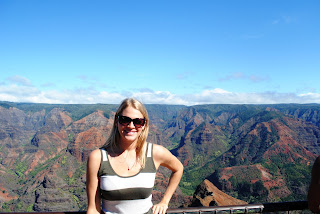 After the Canyon, we wanted to go find the "tree tunnel."  We saw it from the helicopter and thought it would be pretty cool to drive through. Apparently it used to be a 3-mile long road lined with trees that forms a tunnel.  It's only a mile now and it is pretty cool. It would be a nice place to run 1-mile repeats (if there was a better shoulder), ha. 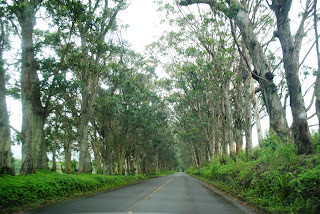 Then, we headed to the airport for our flight back to Oahu and back to reality...

Hope everyone had a great Christmas
Posted by Unknown at 1:22 PM